Heavy rain is continuing to pummel the upper North Island tonight, with hundreds of Auckland homes without power. 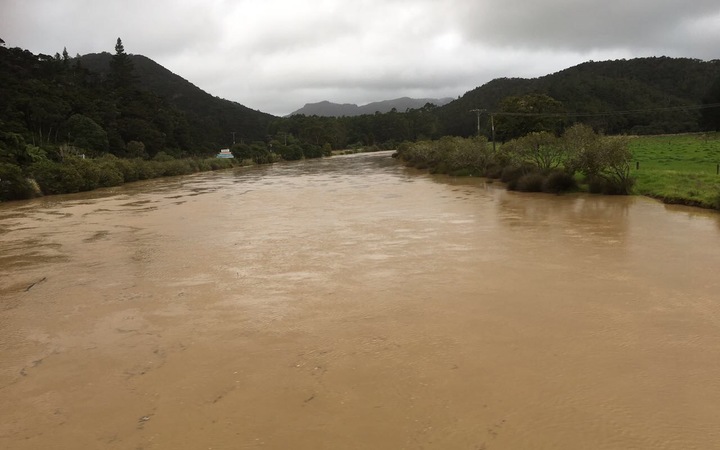 Flooding near Kaeo, on the way to Taupō Bay, in the Far North on 10 March. Photo: Supplied / Stacey Davidson

NIWA said nearly 50mm of rain fell in central Auckland between 5pm and 8pm this evening.

It said 27.6mm of rain fell between 5pm and 6pm, making it a tie with the wettest hour in March since records began in 1965.

North of Auckland in Mahurangi, more than 51.5mm has fallen, and Kerikeri and Miranda have received more than 35mm in the same period.

But he said no one had been evacuated from their homes and no roads were blocked in the city.

"What we are encourging people to do is avoid travel if possible. If they do have to travel they should drive to the conditions and they should never drive through floodwaters."

There have been two landslides near houses on Waiheke Island, with this video, posted on Facebook by Adam Bennett, apparently showing a large slip with a house close to its edge.

More than 600 homes are without power in west Auckland. Vector said the 616 homes affected in Titirangi should have their power restored by midnight.

And in Silverdale, 108 houses are without power, which is expected to come back on at 11pm.

The Fire Service has had about 30 callouts relating to flooding since 6pm this evening, mainly centred in east Auckland.

There had been call-outs in Howick, Beachlands, Waiheke Island and two in the Coromandel, she said.

Rain has also hit Whangamata, with gutters swelling with water and spilling onto footpaths.

Earlier today a family was trapped by flooding in their Far North house.

Far North Civil Defence coordinator Bill Hutchinson said the water has receded and the family in Waiomio, 35km south of Kerikeri, have been able to leave.

He said about 20 people have voluntarily left their homes and were staying at the local Mohinui Marae.

He said there was still flooding on State Highways 1, 10 and 11, south of Kerikeri but it was likely to be tidal.

It has been the wettest week in nearly three years in Northland, and authorities have warned it is not over yet.

Northland Regional Council hydrologist Jason Donaghy said the Waitangi catchment has had 210mm of rain since Tuesday, closely followed by Kaeo with 208mm.

The Far North has had 183mm, Whangarei 100mm and Hokianga has had nearly 100mm - bringing an end to months of water restrictions.

The heaviest downpour was in Waitangi, with 69mm falling in just one hour.

"We haven't seen rain like that since the floods of July 2014 ," Mr Donaghy said.

"But the rain hasn't caused the same problems this time because rivers were low after months of drought."