The Department of Conservation is trying to figure out what to do with the carcasses of hundreds of whales left on the South Island's Farewell Spit. 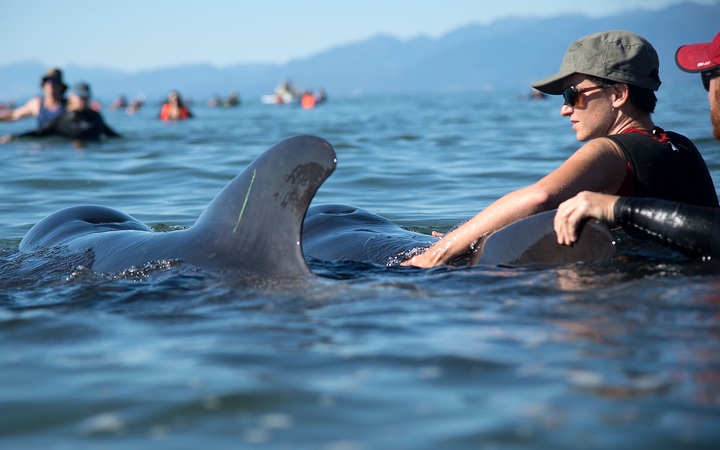 Volunteers guide a stranded whale back to sea on Saturday. Photo: AFP

It comes after several days responding to one of the biggest strandings in the country's history.

Nearly 700 whales have stranded on or near Farewell Spit since late on Thursday and, of those, more than three hundred have died.

Yesterday evening, it was discovered a new group of about 240 pilot whales had become stranded in clusters between Puponga and Pakawau, in Golden Bay.

The majority refloated themselves on last night's high tide, before midnight. They were in shallow water so there was some concern they could restrand.

Efforts resumed this morning to refloat the remaining whales. Volunteers used the high tide, which was about 11.50am. Rescuers said it appeared the 17 had refloated.

"The 17 pilot whales that were part of a larger pod that stranded on Saturday near Puponga have been successfully turned around on the high tide and sent back into deeper water in Golden Bay.

"Two boats were used to guide the 17 whales out to rejoin the original diffuse pod and it is hoped that they will find a way into deeper, safer waters," the Department of Conservation (DoC) said.

The main pod that refloated last night was moving in an easterly direction, near Collingwood.

A spotter plane would check their location.

Rescuers were confident the refloated 17 whales were not at immediate risk of stranding again.

DOC's Andrew Lamason said attention was now turning to how to dispose of the 300 dead whales.

Mr Lamason said they wanted to keep the carcasses from washing out in the high tides and were considering their options to stop them from floating away. 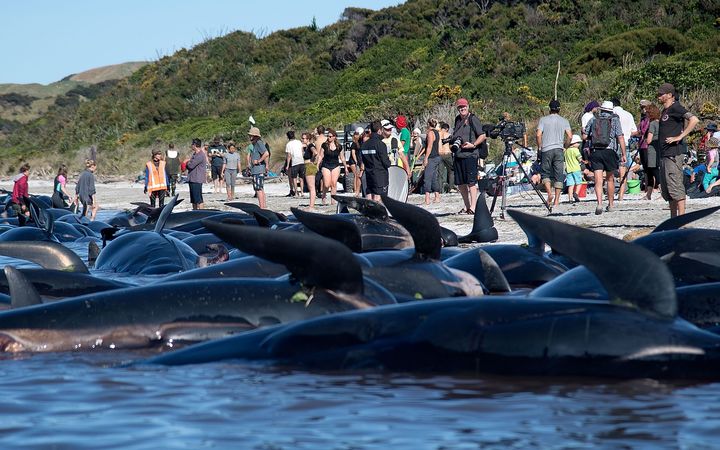 Cause of strandings to be investigated

The latest pod was separate to the 400-odd whales that stranded at Farewell Spit on Thursday.

It was the largest-ever recorded mainland whale stranding in New Zealand.

Only 80 of that group survived, with help from members of the public. DoC believed they were now out at sea. 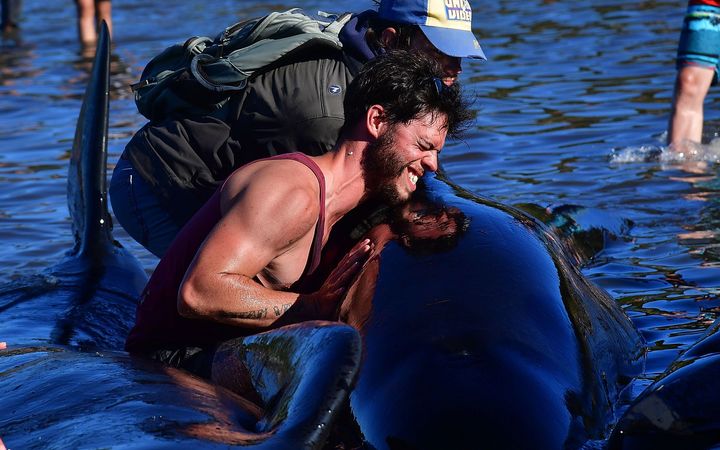 DoC will try to determine the cause of the mass strandings.

Spokesman Herb Christophers said samples would be taken from the dead whales.

"By taking biopsy samples and doing analyses, we're potentially able to isolate the reason for this. It could be as simple as interference with their navigation systems, but that's, once again, theoretical.

"It is thought that because of the nature of this whole Farewell Spit being a very shallow sand spit that it does cause echo-location problems for the whales in finding their way out of that area."

The car park was full and staff were spending too much time managing the number of would-be helpers arriving.