There will not be another attempt to refloat the whales stranded on Farewell Spit until tomorrow, with volunteers working with 60 whales and monitoring another 50 offshore. 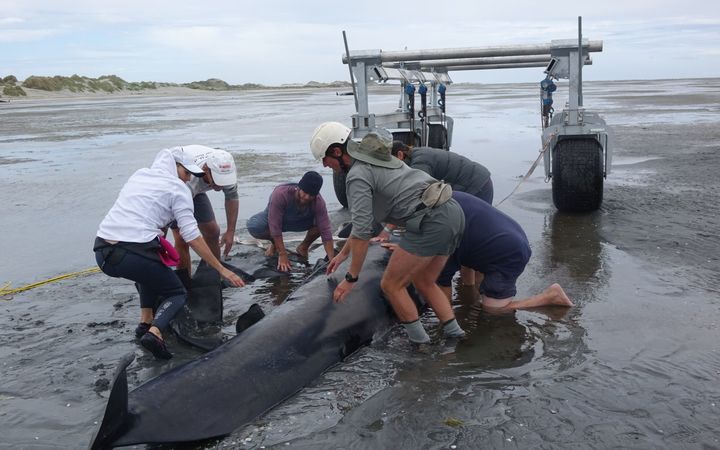 Hundreds of volunteers turned out to help with efforts to refloat the whales. Photo: RNZ / Tracy Neal

He said the 50 whales that were being monitored offshore were believed to be part of the original pod which stranded overnight, rather than a new pod.

More than 400 pilot whales were caught at the base of the spit in Golden Bay with most of them dying, but more than 100 were refloated by hundreds of volunteers and DoC workers on the high tide at 10.30am.

A boat on the water and a line of people in the sea had been trying to encourage the whales to swim in the right direction.

It was hoped the high tide at 11pm tonight would refloat the 50 or so pilot whales still stranded on the beach.

Department of Conservation range Mike Ogle said the whales stood a reasonable chance of surviving as they were in fairly good condition still, with little sign of blistering skin.

He said it was too dangerous to stay with the whales overnight.

"So we've got black animals, wild animals in the dark, we don't want people around.

"We've had some pretty major injuries before, broken arms and legs, people knocked unconscious. That's why we stopped doing it years ago - in the dark, it's just too dangerous."

The whale would decide for themselves at high tide if they swum off or not.

"In the dark, on their own, and then tomorrow at first light we'll be here and we'll find out where they are. And the most optimistic scenario is they just swim away. We've had that happen before and it's beautiful. But we'll just have to wait and see.

"We'll have a big search around the spit, maybe put a plane up as well and go a bit further." 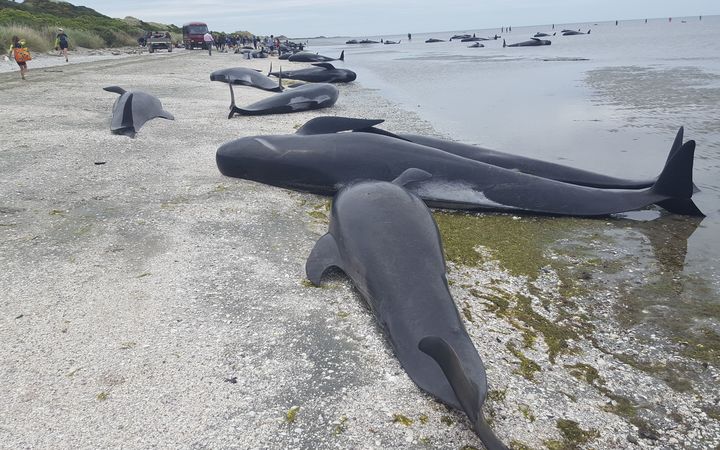 Mr Grover said it was one of the biggest whale strandings ever seen in New Zealand.

"In the early '80s there were 400 that stranded on Great Barrier Island, but this is the largest number in recorded history on mainland New Zealand."

Mr Grover said about 200 people were still tending to the whales and Project Jonah would reassess the situation at about 6am tomorrow.

He said further help was not needed at this stage but if it was tomorrow, they would put a notice on Project Jonah's Facebook page.

Mr Grover said the weather was overcast, blowing and cold and they were paying attention to make sure the volunteers did not get exhausted.

The surviving whales were refloated at high tide this morning, but DoC said about 80 have re-stranded.

DoC said beached whales would be kept comfortable with the help of volunteers until dark, but no attempt would be made to refloat them until lunchtime tomorrow.

It said whales can become agitated when stressed, and can injure or kill a person with a small flick of a whale fin or tail.

Andrew Lamason, the Department of Conservation operations manager for Golden Bay, said more than 500 volunteers had been assisting with the rescue effort.

"Those people that are out will be going in there and keeping those remaining 80 or 90-odd whales as comfortable as possible. They'll be putting sheets over them, keeping them wet and then we'll cross our fingers and prepare for another effort around about lunchtime tomorrow," Mr Lamason said.

DoC staff were very concerned for the surviving whales.

"With that number [already] dead you can assume that the others are in pretty poor nick as well."

Volunteer Kyle Mulinder, who had been on the beach all day and was "knackered", said it would still be tough to leave the beach at night.

"It's always a heartbreaking thing, nobody ever wants to leave any live whales on the beach.

"But, hey mate, being in the water with a whole bunch of whales thrashing around you is dangerous enough, let alone at night.

"Hopefully tomorrow morning there won't be any whales out here."

DoC received a call late last night to let staff know there were whales "milling around" in the area, he said. 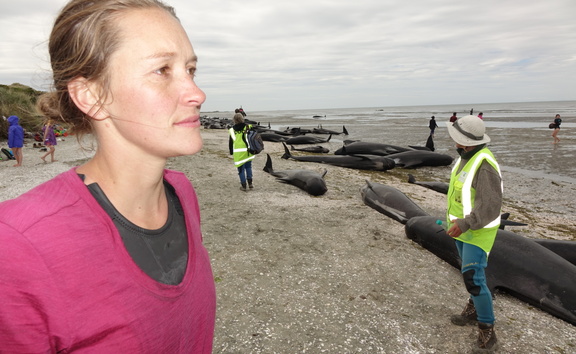 Bridie Griffiths of Golden Bay has been to every whale stranding since she was a child. She said this was the worst she had seen. Photo: RNZ / Tracy Neal

It was not clear why the whales had stranded, but Golden Bay was prone to mass strandings, Mr Lamason said.

The bay was very shallow and once whales got in too close to shore they could find it very difficult to head back out.

Whales can survive for several days as long as they are kept cool and wet, he said.

Conservation Minister Maggie Barrie has praised as heroic people's efforts to save the beached pilot whales.

She said Project Jonah, local volunteers and Department of Conservation staff had worked hard to save the whales, and she wanted to commend their efforts.

Volunteer Cindy Mosey travelled from Nelson with her two children to help and said it was pretty disheartening.

Volunteer Jess Worthington said it was emotionally difficult work, but she felt compelled to try to save the stranded whales.

Seeing the many young whales with their mothers was particularly hard, she said.

"They just follow their mother and their family and they bring them in and they don't really have any say on what happens to them. They're just following their instincts and going where they think they are meant to be going. It's sad." 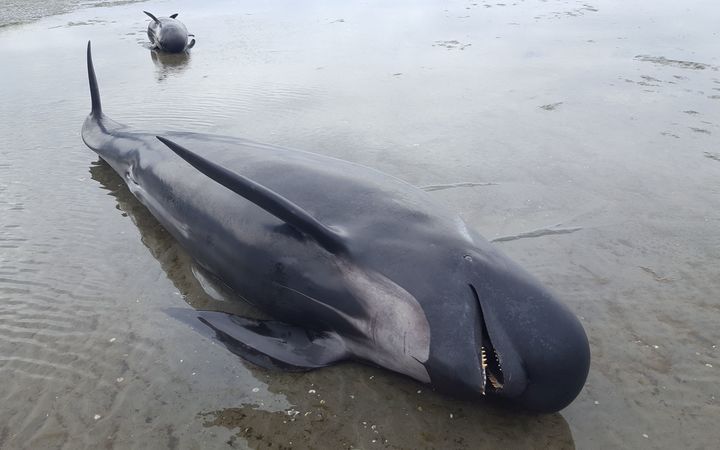 A mother and her calf. Photo: RNZ / Tracy Neal

Seismic testing unlikely to be cause of stranding

A zoologist said it was highly unlikely seismic testing caused the stranding.

Seismic testing is conducted by shooting loud blasts of compressed air through the water to pinpoint areas for oil drilling, or to study the sea floor.

But she said the last seismic survey in the area was done nearly a week ago, which makes it very unlikely to have been a factor in the overnight stranding.

Dr Slooten said pilot whales have incredibly strong social bonds which means there may be only one or two whales that are actually in trouble, but the rest of the group will not leave.

She said the cause of the stranding may never be known.