Protest marchers at Waitangi have accused iwi leaders and the government of failing to act against the scourge of methamphetamine (P).

The traditional hīkoi from the Far North arrived at the gates of the Waitangi marae late this morning, led by Kaitaia anti-drug campaigner Reti Boynton.

About 50 marchers sang and chanted outside the gates as they waited to be welcomed.

Mr Boynton said P addiction increased aggression and crime in the region. It was not just a gang problem.

"We have support from Black Power and Mongrel Mob leaders," he said. "We're sick of it. Our kids are suffering.

"I've got reports of teachers finding it inside school lunchboxes. When the kids are asked what they're doing with it, they say mum or dad asked them to drop it off at uncle's place on the way home. Little kids like this are drug trafficking."

Reti Boynton said people were stealing and turning to prostitution to fund their P habit.

There was a three to six-month waiting list for rehabilitation treatment.

"What are the government and iwi leaders doing about this ... absolutely nothing," he said.

"All that's happening is they're getting paid, and I'm sick of it. Enough is enough."

Mr Boynton said he smoked cannabis and regarded it as his medicine. 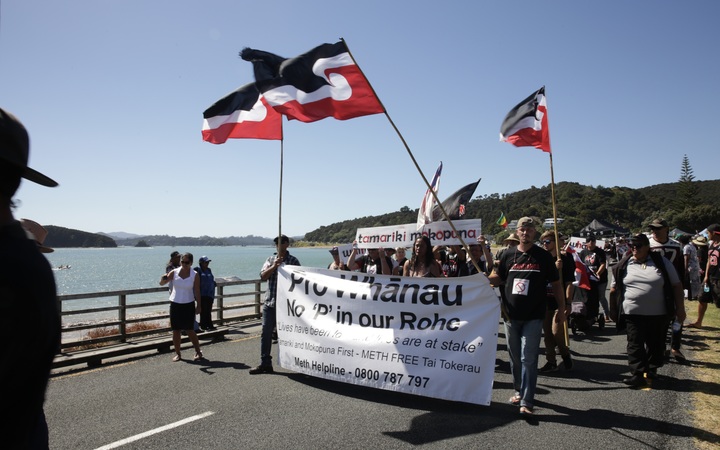 The Kaitaia man led protests in his hometown in 2014 against the sale of synthetic cannabis by a local tobacconist, saying the product was as dangerous as P.

His family was hurt by methamphetamine, he said.

"I get a phone call from my sister in Australia, and she's begging me to help my niece [who is] stuck on this P crap. And she's the parent to my namesake, and this hikoi is all I can do about it."

Northland police and the Northland District Health Board recently announced a joint initiative targeting P-users in a bid to drive down demand for the drug.

The pilot project, involving extra police and addiction specialists, would focus on rehabilitation and is due to get under way this year.