Slips and flooding closed key highways in the South Island while winds played havoc with transport in Wellington.

Not sure which is worse - the noise of the wind or the wind itself #weatherbomb #LowerHutt pic.twitter.com/jnaw3W4uuR

The alternative route to State Highway 1 from Picton to Christchurch was closed at highways 65 and 7 for several hours - effectively cutting off the top of the South Island. It has reopened but is down to single lanes in some places. 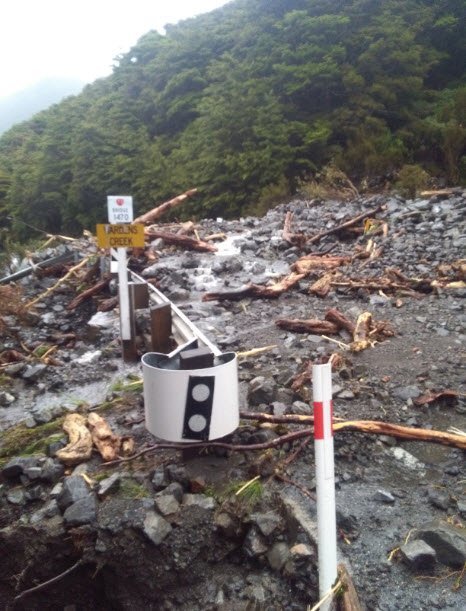 State Highway 1 has been closed north of Kaikōura since the November earthquake.

The only highway to the West Coast that remained open was State Highway 6, Haast Pass - but there was some surface flooding and drivers were being warned to take care.

The gales closed the Rimutaka Hill Road north of the capital as gusts reached 154 km/h, but it has since re-opened.

Winds peaking in Wellington - will begin to ease in next couple of hours as front passes. Heavy rain Tarauas + Taranaki this morning ^TA pic.twitter.com/urGQfQeygC

The weather was causing significant delays on the Bluebridge Cook Strait ferry out of Wellington.

And the Wellington harbour ferry service has been cancelled this morning, with replacement shuttles departing from Days Bay Wharf.

Due to adverse conditions ALL sailings have been cancelled this morning. Shuttles depart DB @6.50am,7.45am,8.35am &QW @8.15am.Apologies, EBW

Metlink said diesel vehicles would replace trolley buses in Wellington again today, and commuters should expect disruption to public transport services, but trains are up and running.

Some flights to and from Wellington have also been delayed or cancelled. Flights to Auckland, Tauranga, Nelson and Melbourne have been cancelled and many other delayed.

The Fire Service in Wellington said it has had about two dozen calls about fallen trees and roofs coming off buildings and sheds.

5.00am and #WeatherBomb the kitchen windows blown out with the wind. Doors rattling pressure in ears going. Small mercy it's not raining

A fault cut electricity to about 300 homes in Lower Hutt early this morning but supplies have been restored. In the Wairarapa, PowerCo is working to fix lines to 190 households near Western Lake in Featherston and 174 properties in Tuturumuri in Martinborough.

Feel sorry for the ones doing the ferry crossing today #WeatherBomb #wellington pic.twitter.com/omo52f12XE

Northwest gales were likely to carry on during the day in Wairarapa, Wellington, Marlborough and Canterbury north of Ashburton.

In the South Island, wind gusts of 172 km/h were recorded near Mt Hutt and 124 km/h at Banks Peninsula.

There was more to come in Otago and Southland, MetService forecaster Stephen Glassey said. A southwesterly change was on its way, bringing severe gales as the low pulled away.

West Coast Regional Council chief executive Mike Meehan told Summer Report there had been less of an impact on the coast than feared.

But they're keeping an eye on the Grey River which is in flood after yesterday's heavy rain and thunderstorms and crews are out assessing roads.