Art might not be the first thing you think of when you hear the words "earthquake recovery" - but the first pieces of post-earthquake art are starting to appear out of Kaikōura.

The jagged coastline near the town has long been a source of inspiration for artists, whether it is bathed in summer sunshine or cloaked in shadow - and local artist Jane Riley has produced one of the first post-quake portraits of the idyllic seaside town.

Ms Riley said the painting - a landscape of Kaikōura harbour and mountains lit by a giant luminous super-moon, with six military warships gliding across the water - was a stark departure from her regular subject matter.

"I like to paint gentle, natural things mostly. But the contrast of the power of the ships and the fact that they'd actually come here to help - it just gave you goosebumps. It made you so proud to be a New Zealander.

"Seeing that moon come up, it was so big and so powerful. And the sight of those ships, it was just incredible." 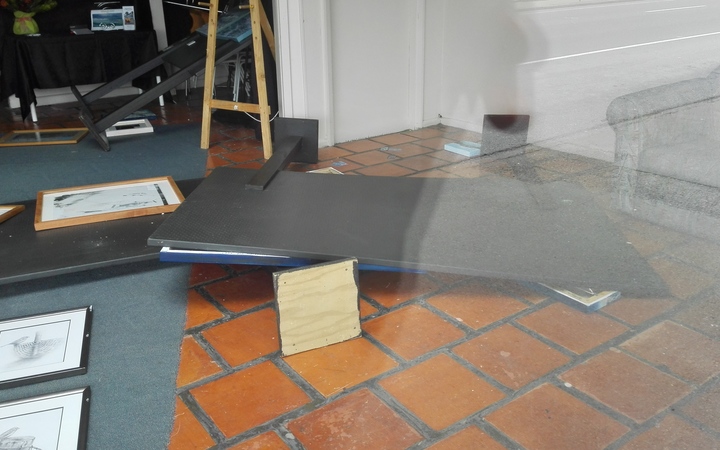 Ms Riley's own art collection was also a victim of the violent shaking, with a painting she had kept for herself, Aroha, suffering a tear in its canvas after falling off the wall next to her bed.

"It was a personal piece, and it had great significance to me. The side cabinet fell on it and ripped a little bit of the bottom.

"I was putting paint into the tear in the canvas and I just burst into tears. 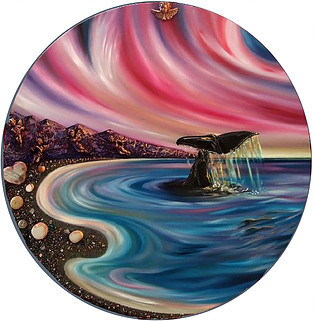 "I thought that it's actually time for this painting to go. And I know exactly where it needs to be.

"It's going to the marae. It had a big whale in it and that's one of their token symbols, one of their guardians. I knew it belonged in Kaikōura. It's a Kaikōura painting."

Ms Riley was also committed to displaying some of her pieces at a gallery showing in Darfield, near Christchurch - which presented some logistical difficulties, getting fragile paintings out of a community cut off from the rest of the country.

"I was assured that the inland road was going to be open, and then that kept getting pushed.

"It ended up that they were going to go out on army trucks, but then the army boys confessed it would be way too rough, and perhaps I shouldn't go that route.

"Then they ended up at the airport and I had everybody looking out for spare room to take them - but then the cloud came in on Thursday, and they couldn't go out that day.

"Friday morning they opened the inland road, and they went out on a convoy with people from Christchurch and were delivered to the gallery on Saturday morning. Very stressful."

The earthquake was not a new experience for Ms Riley - she was also in Christchurch in February 2011, caring for her mother.

She said art played an important, but understated, role in restoring humanity and normalcy to traumatised people.

"When something happens like we've just been through it'd be nice to be a nurse or somebody helpful not a person making lovely paintings.

"But I realised my paintings give people joy and hope, I think. [Art] uplifts peoples' spirits. You do your best with whatever skill you've got, to tell a story.

"And it's an unforgettable story here at the moment."