Wellington businesses are becoming frustrated by a lack of financial assistance as buildings remain closed, staunching incomes for workers and employers alike. 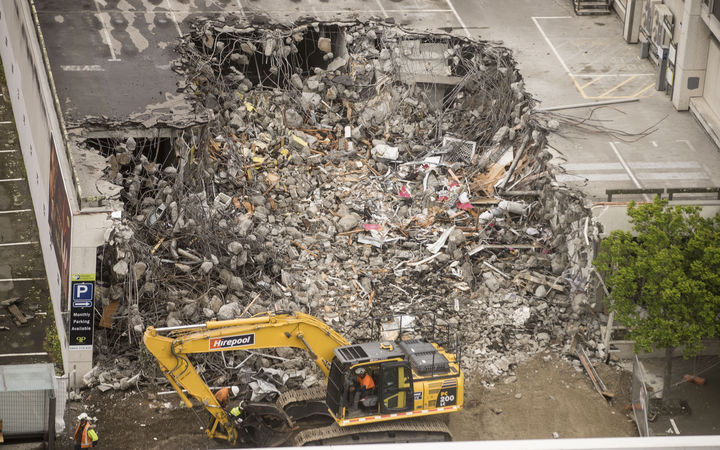 As demolition begins on the damaged building at 61 Molesworth St, Wellington businesses are feeling the sting with no access to the wage subsidy offered for Kaikōura.

Shonagh MacLeod of Thorndon's Word of Mouth cafe and catering business, which is behind a cordon, said she and her staff were under considerable financial pressure.

"As soon as we were locked out, basically our cafe income stopped," she said.

"We can't afford to pay anyone, we've paid holiday pay as we were advised to do.

"But until we can open the doors again, it's no money for the staff." 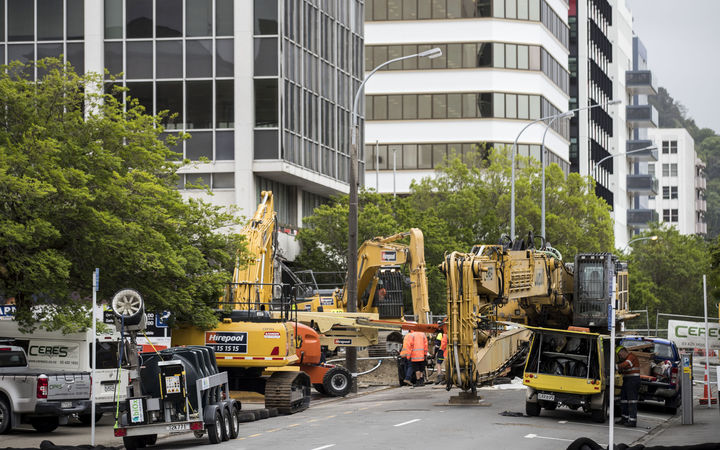 She contacted the government's quake helpline to ask about financial assistance with the wage bill for her 15 workers, but was initially told to apply for the Kaikōura aid package.

"The word came back that we couldn't apply, because we were in Wellington, but if we had staff that were desperate for money they could go into WINZ (Work and Income) and apply for an emergency benefit.

"One of my girls did go in but then was told that she couldn't apply, and I had to apply on her behalf under the earthquake package.

"So, it has been quite frustrating."

Labour's Wellington Central MP Grant Robertson has reiterated his stance that businesses in the city need support from the government.

"I think we all acknowledge that the priority was in Kaikōura and the surrounding areas, making sure that those communities are safe and secure," he said. 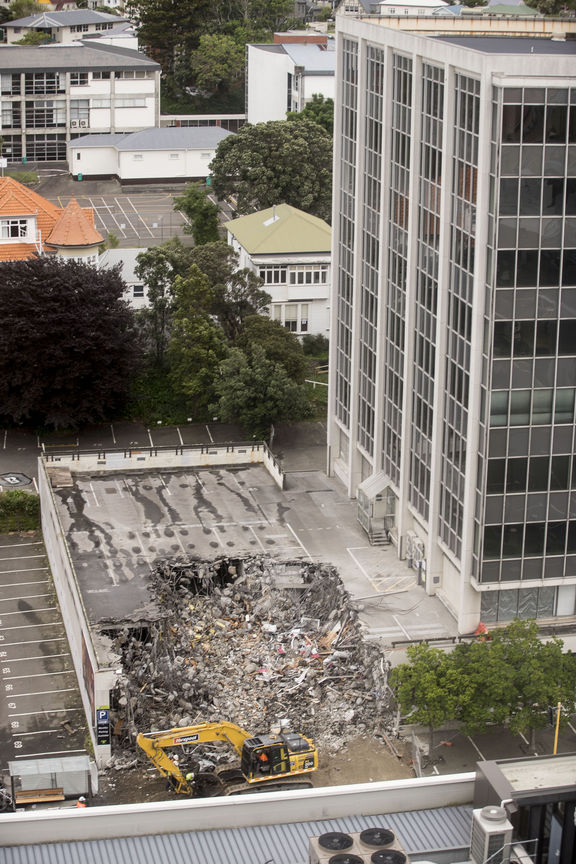 The damaged building can be seen next to the car park building, which is in the process of being demolished. Photo: RNZ / Aaron Smale

"But now we've got people who are really struggling here.

"They need the support package that's been put in place in Kaikōura to be extended to them."

Mr Robertson said the government must step up with a financial aid package.

But Tony Freeman, who operates a bookshop in the same building as Ms Macleod's cafe, said that even if the government agreed to extend the package, it probably would not help him.

"Basically we are a family business, and the two of us run it in the main with some other family stepping in.

"It will depend entirely how the thing is worded but at this stage I can't see it being any help to us, if I understand it to be associated strictly to wages."

Gerard Hehir of the Unite Union said the package may not help workers employed on casual contracts either.

RNZ understood the ministry was waiting for further information from the council, including the number of businesses affected, before giving advice to its minister about whether to approve the package.

Economic Development Minister Steven Joyce said later today no decision had been made yet.

A relatively small number of businesses had been significantly affected, and the government couldn't protect everyone in such circumstances, he said.

Any potential package for Wellington would be tailored and not necessarily be the same as given to Kaikōura, he said.

The Earthquake Commission has already received about 7000 claims from last week's Kaikōura quake.

The commission said the geographical spread of claims was wide, from Auckland to Invercargill.

But the agency's chief executive, Ian Simpson, said the latest quake will yield a much smaller number because the epicentre was far less populated.

Mr Simpson said 7000 claims had come in so far, but it was too early to estimate the total number as people had until 14 February to make one.

Meanwhile all Statistics New Zealand staff in Wellington now have temporary offices, after it agreed to lease part of Westpac House on Lambton Quay.

The crown institute has also leased five floors in the adjacent HP House, since its regular building, Statistics House in Pipitea, was badly damaged in the earthquakes.

Statistics New Zealand said the new leases did not mean their headquarters was up for demolition.