Another four buildings will be demolished, while at least 3000 public servants cannot go into their offices, as Wellington continues to deal with the aftermath of last week's earthquakes. 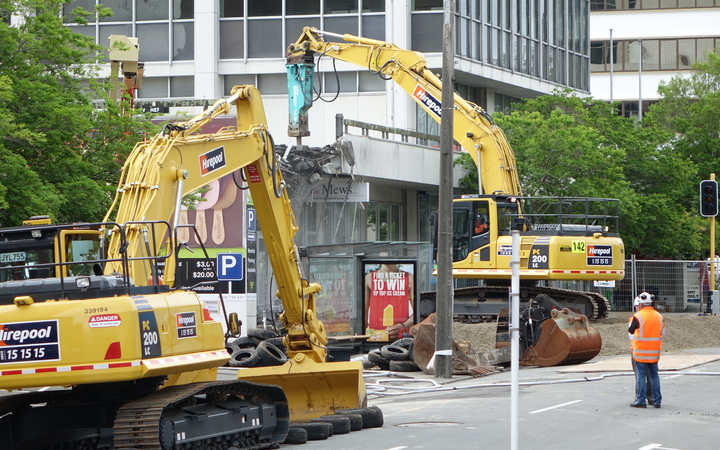 At least four buildings in Wellington - including 61 Molesworth St, pictured - have now been scheduled for demolition. Photo: RNZ / Emile Donovan

A three-storey unit in the Malvina Major Retirement Village in Johnsonville is the latest to be earmarked for demolition, alongside three Wellington City Council buildings and a disused office block at 61 Molesworth Street.

Ryman Healthcare spokesman David King said cracks opened up in the Figaro apartment building's foundations and there was movement in its supports as well.

Engineers said it would make far more sense to pull the building down and start again, he said.

The occupants of the building's 40 apartments would be accommodated elsewhere during the expected 18-month demolition and rebuild.

Earlier today, the council said it would demolish three of its buildings after post-earthquake inspections.

Two are on land between Cable St and Wakefield St, which the council bought for its proposed Movie Museum and Convention Centre.

The council said structural damage to the brick, masonry and concrete buildings made them vulnerable to another strong earthquake.

They were earmarked for demolition anyway, but the work would be brought forward.

The third was the council-owned St John's Church Hall in Karori.

The council said the unoccupied 1960s building was damaged in the 2013 earthquakes, centred in Seddon.

Dozens of other buildings have been shut or cordoned off since last Monday's shake and subsequent aftershocks, although some have since reopened.

Vodafone has delayed returning to its head office in Lambton Quay.

The company's 380 staff and contractors had to vacate 15 storey Lambton House on Monday after a trace elements of asbestos were found in one of two lift shafts during post-earthquake checks.

It hoped staff would return on Friday, but it now expected the problem to persist into next week.

It said no asbestos particles were found in the air.

Vodafone said the building owner would decontaminate and re-test affected areas of the building.

One in six public servants forced out

At least 3000 of the capital's 18,000 public servants have been forced out of their offices as a result of the earthquakes. 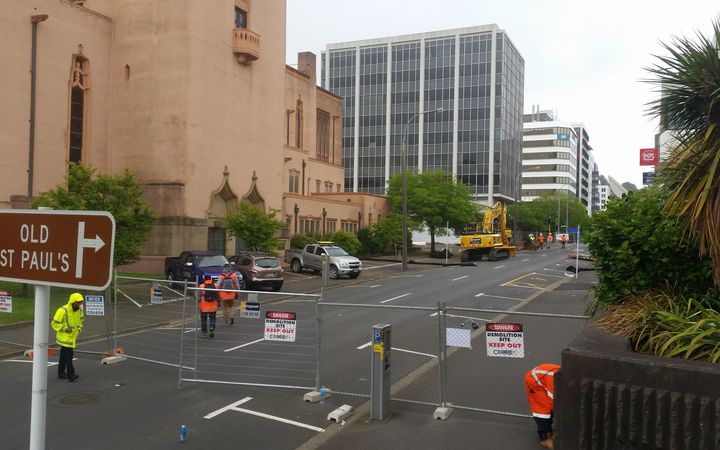 The cordon around the condemned building at 61 Molesworth St has prevented many public servants from getting to their offices. Photo: RNZ / Eric Frykberg

The 15-floor Asteron Centre, on Featherston St opposite the railway station, was evacuated yesterday after an engineer's report found quake-damaged stairwells could be unusable in a major aftershock.

The building is six years old, and is home to 2700 workers, including hundreds of Inland Revenue and Civil Aviation Authority staff.

The Government Property Group said the Asteron Centre closure had increased the tally of displaced bureaucrats.

Inland Revenue staff were this afternoon told they will be out of the building for a minimum of two weeks while remedial work is carried out on the stairs.

An IRD spokesman said engineers confirmed today there was a safety issue.

He said the building houses 2000 IRD workers and some have already been relocated to temporary office space.

The Government Property Group is already dealing with about 2000 displaced public servants, following the closures of Defence House, Statistics House and a series of buildings around the condemned block at 61 Molesworth St. 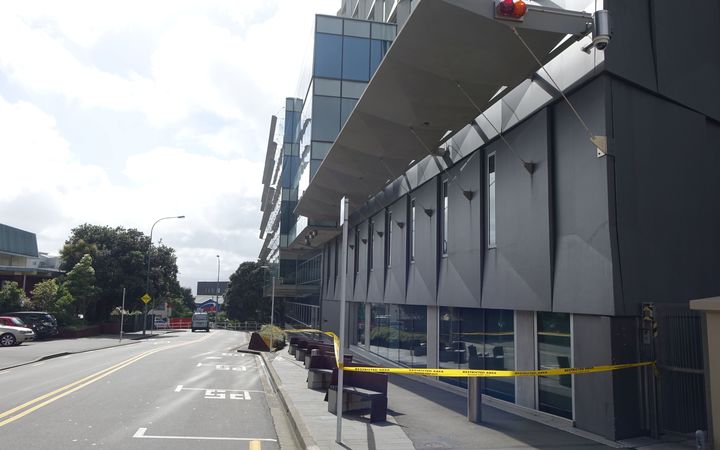 Pipitea House, the home of New Zealand's principal spy agencies, was one of several buildings shut down due to quake damage concerns. Photo: RNZ / Emile Donovan

No danger to public - council

He said there was no significant hazard to public safety and it appeared the damage to the building was more superficial than structural.

Mr Scott said it was acceptable for a building to be declared safe and then unsafe in a matter of days.

"It's not about rushing people back into buildings in an unsafe manner, they do an initial assessment on their best engineering expertise, and I don't have any qualms about that. They then go on to do further work, and obviously there have been a number of quite significant aftershocks. So this is a moving feast."

Mr Scott said engineers notified the council when they found a building was a risk to the public.

'There are cracks in the stairway'

Building owner Mark Dunajtschik told RNZ he took all the engineers' reports seriously, but safety concerns had been overblown.

"There are cracks in the stairway and these cracks have been there already from the last earthquake some years ago and they were plastered up and they reappeared. This was a much stronger quake than the one several years ago, but no new cracks appeared, however the plaster that was put into the cracks last time has cracked again." 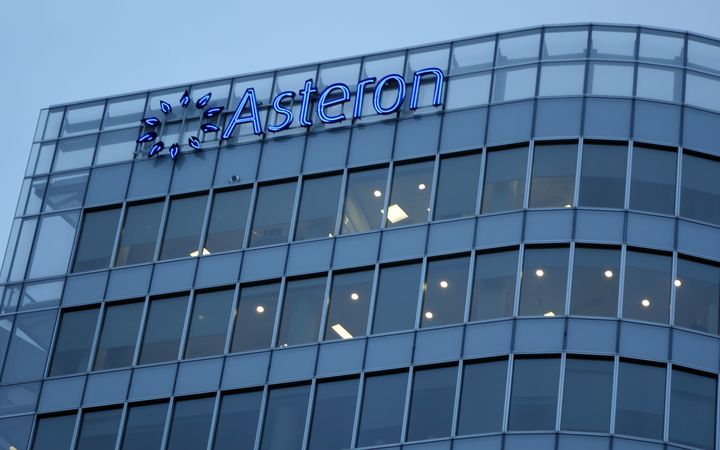 More than 2000 workers have been told to stay away from the Asteron Centre today. Photo: RNZ / Emile Donovan

The building was designed by Warren and Mahoney and built by Fletchers.

Warren and Mahoney managing director Peter Marshall said he was unaware of the damage sustained by the building in 2013, but he was confident about the building's quake resistance.

"It's Wellington, it's built on reclaimed land as a lot of the Wellington CBD is. The engineers are fully aware of the circumstances and situation and they build to code, frequently building over code so there's no concerns on that front."

Mr Dunajtschik said he got an independent engineering report last week which said everything was OK, but Inland Revenue then commissioned its own report, which revealed damage to internal staircases.

"There is nothing undue, the designer is, I would say, the most experienced engineering expert, and somebody else has another opinion, and you have to respect the other opinion."

'The vast majority of buildings are open'

Despite the concerns over the city's buildings, Wellington mayor Justin Lester said his city had come off quite well after the 7.8 magnitude quake on Monday last week.

Mr Lester said he still believed it was the right decision to allow the CBD to be open for business in the immediate aftermath of the first jolt.

"It's been proven to be correct - 99.5 percent of the buildings have suffered little damage and the vast majority are open."

Mr Lester also renewed an earlier warning to private landlords to make sure they exercised their legal responsibilities.

"Private owners need to make sure their buildings are safe.

"We are not telling people to go into private buildings unless they are they have been deemed to be safe and are able to be entered safely."

He said the Wellington City Council might take legal action against a property owner who housed tenants in the Molesworth St building that is set to be demolished.

The 10-storey building, which is owned by Prime Property, is at risk of collapse in a strong aftershock following last week's massive earthquake.

Demolition of the building was due to begin this afternoon and is expected to take between 10 and 14 days.

Olive and Ernest Mape were living there as residents, despite it being a commercial building.

Mr Lester said he did not know for sure whether other residents were also housed in the building.

"So we're going to investigate whether the residential tenancy was in the building, and whether they were unlawful. It appears that this may be the case, but we need to investigate that. And we will undertake a prosecution if the evidence suggests that is the case."

Mr Lester said the company and its insurers were also expected to pay for the demolition costs.

Demolition company Ceres NZ told RNZ that a huge machine that would literally bite into the building with large jaws was now expected to arrive some time on Friday.

Further updates were expected later today for the 13-storey Vodafone building on Lambton Quay and the largest shopping mall in the southern North Island, Queensgate in Lower Hutt.

Employment lawyer Peter Cullen said workers at buildings like the Asteron Centre could strike if they thought their safety was at risk.

Mr Cullen told RNZ workers could protest if the building had not been inspected by an engineer and they felt unsafe, but they were likely to go unpaid.

"I think they should talk to the owner and work something out with them, and say they don't feel safe going in, particularly if there are cracks or other signs of damage, and they'd like it inspected first, and put on special leave until that happens."

RNZ, meanwhile, has evacuated its press gallery team from their building at Parliament.

The news media annex adjacent to the Beehive was yellow-stickered as a result of the 2013 Seddon earthquakes.

RNZ head of content Carol Hirschfeld said the decision was made for staff safety reasons.

"We are not feeling comfortable with the status of that building," she said.

"It has been yellow-stickered for quite some time and with the continuing seismic activity, we will let our staff work elsewhere."

An official at Parliamentary Services said the annex was given an all-clear after the recent quakes.

It was yellow-stickered in 2014 with an overall earthquake rating of 35 to 40 percent.

But the official said some parts of the building fell short of that level.

Parliament was then given until 2029 to strengthen or demolish the annex.

Parliamentary Services said it would try to find somewhere else to house journalists.

RNZ has kept a running list of all the buildings in Wellington affected since the 7.8 earthquake on 14 November. Check them on the map here.