A fortnight after the Kaikōura earthquake, most of the businesses along West End, the town's main street, are still closed - the interiors darkened, some shopfronts cordoned off.

But the door of one of those shopfronts is open, and from it, the strains of Brian FM come floating out.

"I have no idea," Chris Diack says. 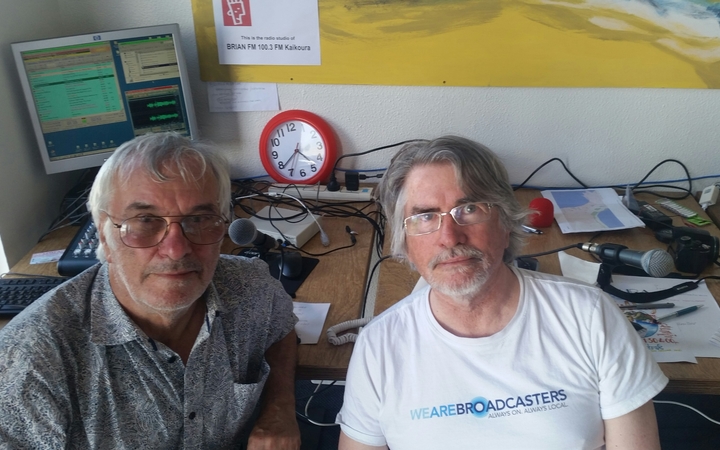 "People are wanting to walk in and talk to Brian all the time and there's no Brian - there's Chris and Robert."

Mr Diack and his offsider, Robert Jeffares, have been broadcasting from their makeshift studio for a week now, after convincing the owner of a local frequency that was not being used to let them take over.

The content is mostly "parish pump information", says Mr Diack - the level of detail the rest of the country might not need to hear but which is invaluable to locals trying to find out where their next hot shower might be coming from.

"The water's off, you can't use the toilets, if you need to use the toilets use the portaloos, and where are they ... Four Square's open at midday, get along there and get some milk, bread and butter... You couldn't buy butter for love nor money in Kaikōura."

In between broadcasting the minutiae of post-quake life, they conduct interviews with the district mayor, civil defence, the Salvation Army, and errant RNZ reporters who wander in to the studio.

Brian FM is not the first post-disaster radio station Mr Diack has set up - it is modelled on a similar station he helped establish in the wake of the 2011 Christchurch earthquake.

"The [Kaikōura] earthquake struck... and it immediately took me back to what we did in Christchurch for New Brighton and Bexley [when] we set up a temporary radio station for about a three-month period."

He and Mr Jeffares gathered together the "repository" of equipment they had collected over decades working in radio, and hitched a ride into Kaikōura on a helicopter that was already taking insurance staff in.

Within three hours of landing, they were broadcasting to people in a 30km radius.

The response from locals has been "extraordinary", Mr Diack says.

"The minute that you give a local voice ... they come very quickly to rely on you. Because as good as network radio is and as good as RNZ is, you can't be broadcasting notices about running out of butter."

Mr Diack plans to return home to Invercargill at the end of the coming week, but could return if the community wanted the station to keep on broadcasting.

"Because the locals embrace you, it gives you a great sense of purpose."