The government has been warned not to cave in and make it easier for Chinese investors to buy strategically important land and businesses, just to secure better access to China's market. 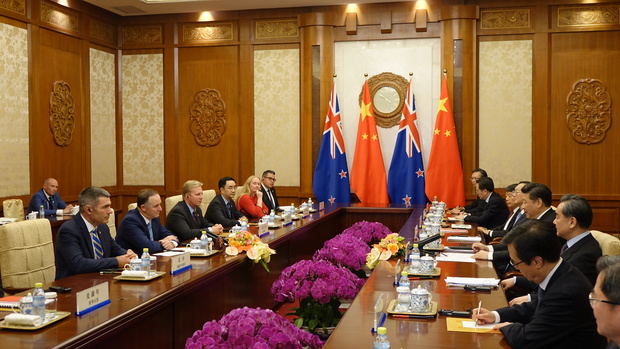 Talks to upgrade the eight-year-old New Zealand-China Free Trade Agreement will start in the first half of next year.

Both countries are aiming to reach the $30 billion mark in two-way trade by 2030, and Prime Minister John Key said an upgrade - particularly in areas such as dairy - was needed to achieve that.

'It's obviously a situation where we will look at the dairy safeguards, and the amount of dairy products we can get into China.

"But it's much broader than that and will include forestry and a range of other areas," Mr Key said.

But he is wary about what China wants in return, and said the government should tread carefully.

"There is a lot of concern for example about the level of foreign investment in New Zealand in some of our strategic industries in our strategic assets, in our iconic scenic areas."

Dairy companies welcomed the chance to level the playing field against their Australian rivals.

"We would like to see a move to all New Zealand dairy exports going in on a lower tariff basis rather than have these safeguards," Dairy Companies Association of New Zealand chair Malcolm Bailey said.

Other sectors such as chilled meat, processed wood products and horticulture are also anticipating easier access.

Chair of Business in Asia at Victoria University, Siah Hwee Ang, said China had evolved from a trade country to an investment country and would want a level playing field for its investors.

"In other words, they are more pro in terms of trying to get more investment done," Professor Ang said.

A former trade negotiator, Charles Finny, said there was no doubt Beijing had some strategic goal in mind, but he was unsure it would be greater access for Chinese investors.

Mr Finny said New Zealand gave some ground in the original agreement, and recent controversies over proposed Chinese investments here will not have escaped the Chinese leadership.

"I'm sure they'll be aware there is not that much the New Zealand government can do further to what has already been done."

"But we did obviously indicate through the TPP process a willingness to commit certain things for other jurisdictions. Maybe the Chinese may looked at that and want something similar," Mr Finny said.

Beijing may have other reasons too.

Victoria University's Professor Ang, said New Zealand's support for the Regional Comprehensive Economic Partnership (RCEP) which Beijing is promoting, may be part of the price for China's commitment to the upgrade talks.

He said the speed of cutting a deal may be linked to RCEP's progress.

"I think that timeline wise, it is more likely to be tied closer to how fast RCEP is being done."

Managing director of Mahon China Investment Management David Mahon warned New Zealand should temper its expectations about what it may get.

"In the end I think that its going to be only very small gains."

"China is not motivated really to give us a great deal. And correctly they can say you (New Zealand) already have a lot in terms of the structure of the original free trade agreement so I think the gains will be incremental," Mr Mahon said.

A first round of negotiations will start in the first half of next year and Mr Key reckoned a deal could be wrapped up in a year.

Mr Finny was not as optimistic, and he expected a difficult and protracted discussion.