Wellington continues to count the cost of Monday's huge earthquake, with part of Courtenay Place in the central city now out of action. 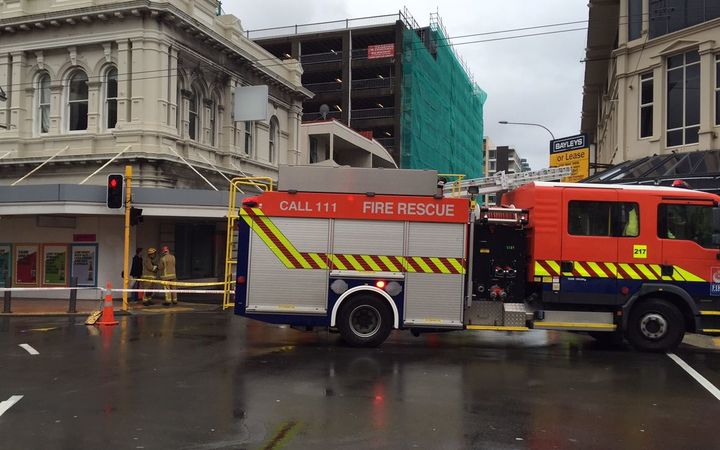 The Reading Cinema complex has been closed over fears the parking building behind it could collapse.

Engineers say it will have to be demolished before it falls over.

Dozens of people were evacuated yesterday afternoon from 10 surrounding buildings, which may be off-limits for weeks.

Elsewhere in the city, the National Archives building was also evacuated yesterday, only a day after being declared safe, and New Zealand Post's multi-storey office building is closed until at least Monday.

Statistics House on the waterfront was so badly damaged it is likely to be out of action indefinitely.

A report is expected today on the damage to Defence Force headquarters in Thorndon.

RNZ News understood staff have been told they will be out of the nine-year-old building for a year, but Wellington mayor Justin Lester said the building had not suffered long-term structural damage

Mr Lester said while engineers' assessments showed there had been some stress on the building, it was thought the repairs needed would only be over the short to medium term, not the long term.

A decision on what to do with the precious historical documents held in the Archives New Zealand building in Wellington is unlikely to be made until at least later today.

The Mulgrave St building was evacuated yesterday because a structural engineer saw cracks in a wall.

The building is home to some of the country's most important documents, such as the Treaty of Waitangi.

The Department of Internal Affairs said the closure was precautionary, and at the time of the evacuation, all of its holdings were secure.

Further information on the building's safety was expected today, and a decision about the documents will be made after that.

At the port, two buildings have been damaged, parts of the waterfront are buckled, and stacks of containers have been left in a precarious state.

But some parts of the port, such as the ferries and an oil terminal, have returned to business.

CentrePort chairperson Lachie Johnstone said a cruise ship is due in next Monday, and he expected it will be able to dock.

Mr Johnstone said the company could potentially load logs from next week onwards, and a car ship was due as well, but work will be confined to areas approved by engineers as safe.

'Maybe we need to be a little more cautious'

Peter Smith, the president of the Society of Earthquake Engineering, told Morning Report today it was surprising Wellingtonians were allowed back into the CBD shortly after Monday's 7.8 earthquake.

He said the performance of buildings during a quake depended on their height, stiffness and the nature of the ground they were on.

Mr Smith said it appeared buildings between eight and 15 storeys high have been the worst hit, while short, low-rise buildings had minimal damage.

"It certainly was a very significant earthquake," he told RNZ's Morning Report.

"Maybe we need to be a little more cautious after such an earthquake before we start entering and occupying those buildings."

But Mr Lester has defended the Council's decision to allow people back into the city so quickly.

He said the decision was made on expert advice from council staff and Wellington's Regional Emergency Management Organisation.

He said the decision had also been endorsed by central Government.

"Last night and today I've checked with the Prime Minister, I've spoken with the Minster of Housing Nick Smith, the Minister of Local Government Sam Lotu-Iiga and this morning with Minister Gerry Brownlee as well, and they support the actions we are taking. Rhe greatest calamity you can face is to have your city not functioning.''

Christchurch earthquake survivor Ann Brouwer also urged Wellington Council to be conservative about allowing people back in the city.

She was crushed and saw fellow passengers die when masonry fell on their bus on Colombo Street in the 2011earthquake.

"Most of the buildings on the city block I was on were red stickered so they were unfit for occupation but the street itself was open. Had that street been red zone or an exclusion zone, our bus would have taken a very different path, both literally and figuratively.''

She said the council needed to realise lives were at stake.

"Think about how you're going to sleep at night if your overly optimistic predictions turn out to be wrong.''

Brendan Nally, the Wellington regional manager for the Fire Service, said it had the resources to manage a quick response if buildings needed to be evacuated.

Mr Nally said the vast majority of buildings in the city had stood up well, but the Fire Service was able to manage the initial phase of clearance if needed.

"Whenever New Zealanders want help, we'll be there to do whatever we can to help. But I have the full resourcing that is normally available, plus I have fire-fighters that are trained as USAR technicians from around the country to pull into the city to assist."