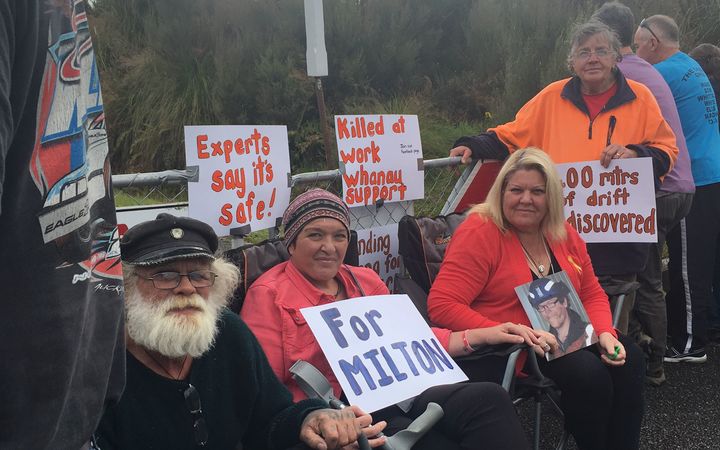 Angry families say they only want to get into the mine drift, and have evidence to prove it is possible.

The mine's owner, Solid Energy, is in the final stages of permanently sealing the mine, sparking families to protest at the mine entrance.

In a private meeting in 2011, Mr Key gave the families his "absolute reassurance" he was committed to getting the men out.

Today, Mr Key said re-entering the mine was not a practical option.

"We've spent millions of dollars trying to find a safe way in, but I can't - either legally or morally - send people into something that could be a death trap ... that would be lunacy," he said.

This Saturday marks six years since the tragedy in which 29 men died.

Sonya Rockhouse, who lost her son, and Anna Osborne, who lost her husband, have been blocking the entrance to the mine in protest, saying they have evidence it is safe to re-enter the drift.

Environment Minister Nick Smith told the 31 families at a meeting last night the government had spent more than $5 million trying to find a way in.

Ms Rockhouse said it was a frustrating and pointless meeting.

The government would not listen to her evidence that proved the mine's drift was safe to enter.

"It's possible my boy is lying down the bottom of the drift," she said.

Dean Dunbar's son, Joseph, was one of the 29 victims. He turned 17 a day earlier.

"My son deserves better. The government don't own my son's remains."

The families should have been notified about the sealing of the mine, Mr Dunbar said.

"We thought we had more time, and right before the anniversary, they start sealing the mine behind our backs, without notice, without a phone call, an email - nothing."

"To deny a father the opportunity to be there, at that moment, is just about as disturbing and disgusting as walking away after the first explosion."

Mine protest over for now

Ms Rockhouse said the fight to bring their loved ones out had been exhausting. Protesters would now take a break to reassess their options.

"I really feel like I've let my son down, I hope he is up there somewhere, realising that Anna and I have fought for a long time, and we've fought hard, but when you're dealing with a government that just don't want to listen, that makes it very difficult."

Ms Osborne said they knew the mine drift was safe to re-enter.

"We also know that there is a high possibility of finding loved ones remains in that mine and I do not want a permanent seal on that drift, enclosing my husband or any of the other miners, until we have had that opportunity to explore it," she said.

She rejected Mr Smith's claim the government had spent more than $5 million trying to find a safe re-entry method.

"Look we've got experts from overseas, who know that that gas is safe to re-enter. It's been safe for a few years now.

"We know that it's safe to re enter, we've got guys who are prepared to re-enter that mine and, because of that, we have that hope of finding our loved ones up that drift," she said.

Mr Smith told Morning Report he had always tried to be understanding with the families, and was just telling them the truth.

He said a new proposed seal would be long-term, but it could be re-opened.