It was a hive of activity if a silent film of the first military conscription ballot held in this country in World War I is anything to go by.

Carried out on 16 November, the film was shot in the office of the Government Statistician in Wellington. 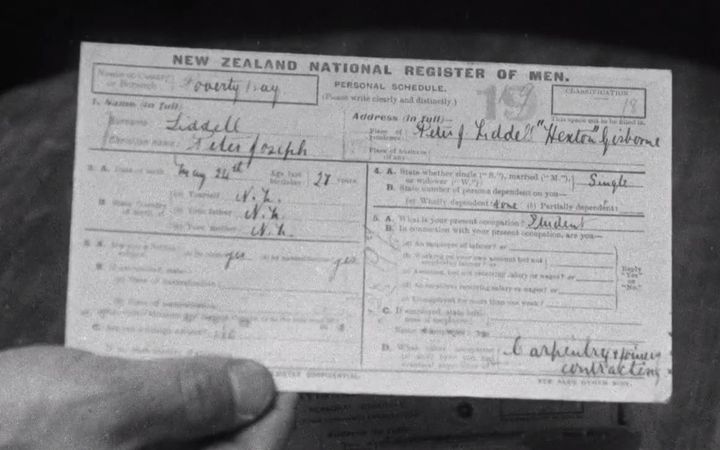 Government Statistician Malcolm Fraser was in charge of the ballot at Routh's Building which was supervised by a Magistrate. Also there were press representatives, and the mayor and president of the Trades Council.

Conscription was described by the New Zealand Truth newspaper at the time as "the first gamble in human life" and "An Epoch Making Event in New Zealand".

After the Military Service Act was passed in August 1916, it was only three months later that the first ballot took place.

It took more than 20 hours to complete and the names of 4140 men were drawn out.

There had been a very good response from volunteers wanting to fight, but as the war dragged on it quickly became evident reinforcements were needed to keep up the strength of the 18,000 strong New Zealand Division fighting on the Western Front.

"To ensure there was no skullduggery possible. It was a very fair ballot system."

Dr Pugsley said conscription gave some control over who was signing up because it was not always in the country's best interests if certain people went overseas to fight.

He gave the example of the entire senior class of the Otago Medical School going to Gallipoli as stretcher bearers in 1915.

"Suddenly there is this enormous black-hole in future doctors in New Zealand. In some areas, in terms of expertise, because we were such a small country we were wafer-thin and they were people who, even though they may have wanted to go war, would have been doing a greater service to New Zealand if they stayed in New Zealand."

There was a grudging acceptance of conscription, but not from everyone.

"There was a feeling that New Zealand still had to play its part," said Dr Pugsley.

He said the union and labour movement were particularly vocal against it and held mass meetings and demonstrations through out the country.

"What was quite apparent to a number of people at the time was the inequality of large masses of working-class people being conscripted and sent off to the front whilst the profits of the capitalist-class were left largely untouched."

"The memory of land seizures and confiscations and war with the Crown was very fresh in peoples' minds, so that created an unwillingness to serve the empire and the Crown in an overseas war."

Mr Anderson said the mainstream media tended to fall in line with the government view in support of the war effort.

The opposition to conscription continued after 1916.

"It was given a boast by the efforts of trade unionists in Australia opposing conscription there."

There was no conscription in Australia after the government there lost two referenda on the issue - in 1916 and 1917.

Dr Pugsley believes conscription in this country was inevitable.

"It was a sensible response to an unprecedented crisis."

Ballots were held each month for the rest of the war but the numbers required were reduced over time.

Dr Pugsley said New Zealand had calculated that if necessary it could keep the New Zealand Division at full strength until September 1919, but of course with the Armistice agreed in November 1918 that was unnecessary.

Note: Conscription was used in New Zealand in response to wars between Māori and government forces in 1845. And in 1940, the National Service Emergency Regulations were passed to introduce conscription for the Second World War. All men aged between 19 and 45 were required to register for military service.