A man has shown a jury the scar below his right ear where he was stabbed seconds after his best friend was killed in a fatal knife attack. 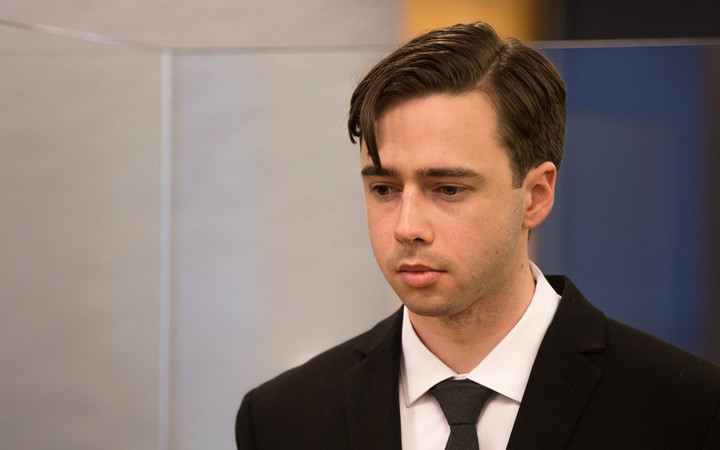 Devaray Cole-Kurvarji is giving evidence at the High Court in Auckland, where Dustin La Mont is on trial for the murder of 24-year-old Nathan Pukeroa.

Mr Cole-Kurvarji yesterday told the court he was at a party when he spotted a man out on the street acting suspiciously.

He confronted the man and moments later he and his friend had been stabbed in the neck, he said.

Mr Cole-Kurvarji had been drinking with a group, including his best friend Nathan Pukeroa, outside a sleepout at a property in Mt Albert.

He told the court that he had been urinating behind a bush when he saw a man walking past the driveway.

Mr Cole-Kurvarji said he followed the man out on to the street and saw him at the end of a cul-de-sac and bending down at a wall.

It appeared the man had picked something up and he yelled, asking him what he was up to and what was in his pockets, he said.

Mr Pukeroa came out too and the pair confronted the man.

"Pretty much as soon as Nathan got into striking range, I suppose you would call it, the person stabbed him in the neck.

"I didn't know that he had stabbed him. I thought he had punched him or something. So, I jumped to attack him, I suppose, thinking that he had punched Nathan and in the midst of that little two seconds of scuffle, he turned and somehow hit me in the neck and then ran towards the exit of Renton Rd."

He began to chase the man, but soon realised Mr Pukeroa was hurt and stopped, he said.

He only realised Mr Pukeroa had been stabbed when he saw the blood pooling. He tried to apply pressure to the wound and lay his friend on his side to stop him from choking on the blood, but there was nothing he could do.

"I don't know, you'd probably call it a Māori thing or something, but I felt him die. I knew he was gone."

It was only later that he noticed he was also bleeding and he had to undergo surgery.

Under cross-examination from Mr La Mont's lawyer, Kevin Brosnahan, Mr Cole-Kurvarji denied he was making things up. He also denied that he and Mr Pukeroa had fanned out to stop Mr La Mont escaping.

Mr Brosnahan questioned him over inconsistencies between his statement to police and what he has said in court.

The evidence is important because Mr La Mont's case is that he acted in self-defence.

Earlier Mr Cole-Kurvarji was questioned about his background, that included growing up in Kaitaia and leaving school at age 13. He also told the Crown prosecutor Steve Haszard that he had convictions for receiving stolen property, burglary and aggravated robbery.

He had also been a prospect for Mangu Kaha, or Black Power.

"I've given my colours back to them ... I've asked to leave the gang as I no longer want to add risk to my life."

He was asked by Mr Haszard what caused that change in his life.

Mr Cole-Kurvarji responded: "This incident, to be honest. Anyone can get hurt or killed at any time. I didn't see that being in a gang was worth adding risk to my life".

Mr Cole-Kurvarji will continue to be cross-examined today.

The court was also told yesterday that Mr La Mont turned to Crimestoppers to report his neighbours' behaviour in the months leading up to the killing.

Constable Franklin Den Hartigh worked in the police intelligence unit and was assigned three complaints made by Mr La Mont, using the service.

People can leave information for the police anonymously using Crimestoppers but Mr La Mont left his name and email address.

Mr Hartigh said Mr La Mont reported a glass methamphetamine pipe being thrown over the fence and that he had seen his neighbours using drugs around children.

He had also called police about someone being hit and reported seeing gang members on his neighbours' property.

Mr Hartigh said he visited Mr La Mont at his home and asked him to keep an eye on his neighbours.