The Voluntary Euthanasia Society says a bogus police breath-testing checkpoint was "duplicitous" and it will lay a formal complaint. 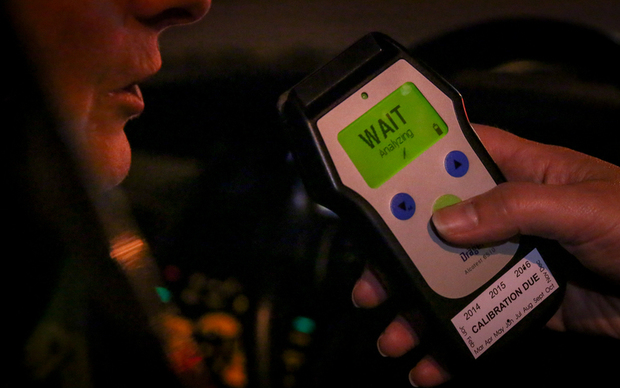 The Voluntary Euthanasia Society will make a complaint about the checkpoint to the Independent Police Conduct Authority today. Photo: RNZ / Alexander Robertson

Yesterday police admitted they used the checkpoint to identify and trace people who had been at a meeting organised by euthanasia advocacy group Exit International in Lower Hutt earlier this month.

Shortly afterwards, they announced they had reported themselves to the Independent Police Conduct Authority (IPCA).

Voluntary Euthanasia Society president Maryan Street told Nine to Noon her organisation would lay its own separate complaint today with the IPCA.

She was "absolutely certain" police had breached their own powers.

"This is a duplicitous activity. They have said they've done it in good faith, but it's been anything but."

Police had then compounded that duplicity by using the information they gathered to visit at least six people who had attended the meeting - behaviour that was "effectively harrassment", Ms Street said.

Police have refused to comment on the motivation for the visits, citing their responsibilities to the coroner.

That indicated that the checkpoint and other police behaviour may have been driven by a coroner's request, Ms Street said.

"It may be perhaps that a coroner - maybe one in the Wellington district - has seen a few suicides of elderly people recently by similar methods."

However, it was a "huge leap" to start monitoring people who were merely attending a meeting.

"If an aiding and abetting [suicide] prosecution is in the wings or that is what the police are investigating, then they've got to be very specific about where they're going for their information, and not do this clod-footed trawl through the membership of a group that has a right to exist."

"This will do nothing for their credibility for the next police check people are pulled over for - they will wonder what the information is being used for.

"The police have really shot themselves in the foot."

Human rights lawyer Michael Bott told Morning Report the Land Transport Act was very strict about when police could pull people over and for what purposes.

What police had done in Lower Hutt was a "fishing expedition" that breached those laws, he said.

"If they were so concerned about this meeting then they could have easily have just had a police informant in the meeting."

Police would have known what they were doing was not legal, Mr Bott said.

"You saw it with the Red Devils [gang] case, with basically police lying on a search warrant and manufacturing convictions to get one of their own over the line - so there appears to be a pattern that if the goal is big enough, or they deem it so, they'll break the law to do it."

The actions of the police could end up having a chilling effect.

"People might think twice about going again to such meetings if they're going to get the unwanted and unwarranted attention of the police on their doorstep."

The Police Association said using checkpoints to obtain information about people for investigations could be justified - but targeting a group of elderly euthanasia supporters in that way overstepped the mark.

Association vice-president Luke Shadbolt said checkpoints could be used for purposes other than road safety.

"There can be some legitimate reasons for doing checkpoints to find out information about criminal groups or some kind of criminal activity ... but this euthanasia meeting I don't think meets that threshold, and police have been quite upfront in saying that they probably made an error of judgement in this case."

The police could have better used their resources for more pressing matters, he said.