Helen Clark has congratulated Portugal's Antonio Guterres as the "clear winner" in the selection for next United Nations Secretary-General. 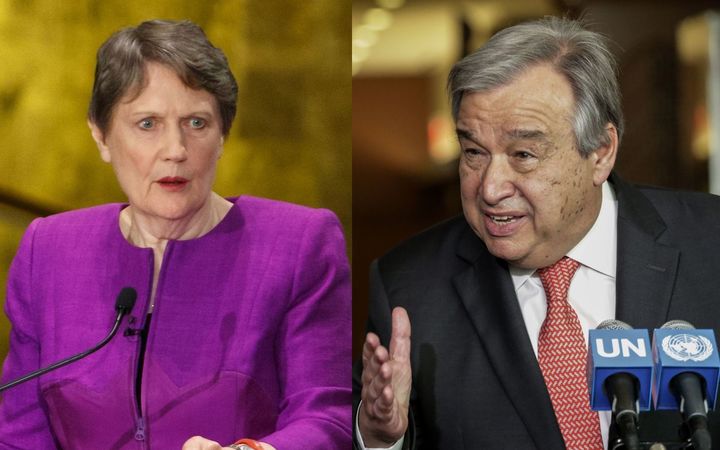 Congratulations Antonio #Guterres. Clear winner in selection for #NextSG. A longtime colleague: we were Prime Ministers & UN heads together: https://t.co/8FYcXRaYfP

The former Portuguese prime minister is poised to take up the role after none of the five UN Security Council veto powers voted against him in a sixth secret ballot, diplomats said.

Helen Clark ended up fifth overall but three of the permanent Security Council members voted against her, effectively vetoing her selection.

The 15-member Security Council cast secret ballots for each of the 10 candidates with the choices of encourage, discourage or no opinion. Mr Guterres received 13 encourage votes and two no opinion votes. Miss Clark had six encourage, eight discourage and one no opinion.

"Today after our sixth straw poll we have a clear favourite and his name is Antonio Guterres," Russian UN Ambassador Vitaly Churkin told reporters with his 14 council colleagues standing behind him.

"We have decided to go to a formal vote tomorrow morning at 10 o'clock, and we hope it can be done by acclamation," said Mr Churkin, who is council president for October.

The overnight vote was the sixth, and the first of the informal polls to give an indication on whether any of the five permanent council members would veto a candidate.

World powers may have been nervous of 'reformist' - Key

Prime Minister John Key said Miss Clark was seen as someone who would not always toe the line of the permanent Security Council members, and would challenge them.

"I personally think that's what the United Nations needs, and I think Helen would have been a lot more careful about that than they might have feared."

Mr Key said Russia favoured a UN Secretary-General from Europe or Eastern Europe, and was likely along with France to have given a veto vote to Miss Clark.

The third veto may have been the United States, as is being speculated, possibly under a deal to have a European rather than Eastern European candidate.

Labour Party leader Andrew Little said some members of the Security Council wanted someone who would please everyone around the table instead of a leader which the UN so desperately needs.

Mr Key said the former Portugese Prime Minister would do well as Secretary-General, and Miss Clark described him as a long-time colleague in a statement congratulating his all-but certain selection.

"Antonio and I met when we were both Prime Ministers, and have worked together as heads of major UN agencies in recent years. Antonio has the knowledge and experience to lead the United Nations well, and I wish him every success."

For Mr Guterres to be formally recommended to the 193-member General Assembly for election, the Security Council still needs to adopt a resolution behind closed doors. The resolution needs at least nine votes in favour and no vetoes to pass.

Clark was a slim chance - analyst

United Nations analyst and blogger Mark Goldberg said Miss Clark never really had a shot at the top job at the UN.

Mr Goldberg, the author of the United Nations Dispatch blog, said Mr Guterres had been the frontrunner from the start and that did not bode well for Miss Clark.

"She never placed very highly in any of the straw polls, she was always in the middle or at the bottom of the pack.

"However, for reasons that are beyond ours to divine the Security Council did not approve her candidacy."

Mr Goldberg said Mr Guterres would be well placed to head any UN response to the massive refugee crisis facing many parts of the world.