People are borrowing more money than at any time since 2000, new Treasury figures show.

They are also borrowing more than people do in most OECD countries.

In the paper Treasury said the cost of servicing debt had declined due to low interest rates, but economists said people should not rely on this too much.

The paper said debt rose when the cost of houses increased in the mid 2000s, but fell again when house prices stalled during the global financial crisis. 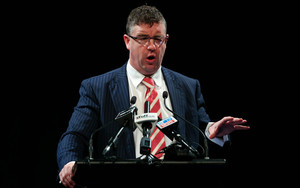 Then, with prices back up again, average household debts rose to 165 percent of disposable income.

"We know the housing market has been going berserk," he said.

"We have seen credit growing at about 8.5 percent and that is about double the rate of income growth so household debt has grown from 159 percent of disposable income to a high of 165 percent."

The Treasury figures showed this was high compared with other developed countries, with New Zealander's debt putting the country in the top quarter of the most indebted countries in a new OECD report.

Mr Bagrie said this was negative for the economy.

"At the moment, I think were are on a bit of amber alert."

Raeywn Fox from the Federation of Family Budgeting Services said many people she met were not even borrowing for a house, but just to stay afloat.

"So they are not deemed creditworthy by the bank and so have to go to the higher-interest credit providers."

She said they were often getting into debt for very basic things.

"We are seeing it not for luxuries, but quite often essential household costs; the car breaking down or needing new tyres; you need to replace the fridge; or the children need new shoes.

"They are earning at such a level that there is nothing left to pay for such things."

David Tripe of the School of Economics and Finance at Massey University said he saw some silver lining.

Interest rates had been falling, and he noted figures from Treasury showing that the cost of paying for debt had fallen from a peak of 14 percent of disposable income in 2008 to 9 percent.

Low interest rates were likely to last for a while but not reliably so.

"We are not likely to see any major rise in interest rates in the near future," he said.

"On the other hand, circumstances could change. House prices could fall or unexpected events in the global economy could cause interest rates to rise dramatically.

"Either of those things could be upsetting to people who have significant amounts of debt."