The Department of Conservation (DOC) and health officials have moved to reassure the public that 1080 poison drops on the West Coast today are being done safely and are within the rules.

1080 poison will be dropped on nearly a million hectares of land this year as part of DOC's war on pests, known as the Battle for our Birds.

But there's concern on the West Coast that the poison is being dropped dangerously close to the start of school holidays, and that DOC is behaving in a cavalier fashion.

New Zealand First MP and 1080 opponent Richard Prosser said the poison was being dropped on the West Coast far too close to the start of the school holidays.

"We're right at the start of the school holidays, and I understand that there is some provision within the consents that have been issued that publicly accessible areas not be treated with poison during a holiday period, or within a certain timeframe of it," Mr Prosser said.

"But they seem to have taken the start of the holidays as being Monday, instead of today and tomorrow, which is when many families are heading off on holiday."

DOC's permit for using 1080 specifies the poison can't be dropped in publicly accessible areas within 24 hours of the school holidays starting. 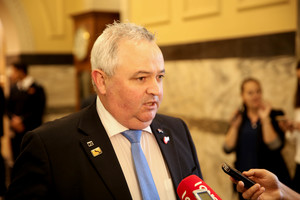 Richard Prosser said 1080 was being dropped far too close to the start of the school holidays. Photo: RNZ/Elliott Childs

DOC's operations manager for the northern West Coast Bob Dickson said public safety was paramount - and the only drops happening today in the Kahurangi National Park were in an area that was not publicly accessible.

"The school holidays are something we are very mindful of, which start ... Friday.

"So we realise that where we have track networks where the public may be utilising those we would not be proceeding with 1080 drops in those areas," Mr Dickson said.

West Coast medical officer of health Cheryl Brunton confirmed she had issued the consent for this drop.

"The operation that is happening up there today, which involves toxic (1080) up there, is within 24 hours of the onset of the school holidays, but it is permitted and has been discussed with me because it's not within a publicly accessible area."

Dr Brunton said she was also aware of public concern about other 1080 activity near Seddonville in the Buller district.

"Now, what it happening (there) today is not a drop of toxic bait but a drop of non-toxic pre-feed.

"Non-toxic pre-feed doesn't require a public health permission and can be dropped at any time."

Jim Hilton, an anti-1080 campaigner on the West Coast who monitored today's drops, said 1080 was an indiscriminate killer.

"It's used for killing things, it's not used to save things and quite simply you drop it out of the sky from helicopters, it's indiscriminate, it's not targeted.

"You know they might think they are targeting rats, but the birds eat these things too."

Back at the Beehive, Mr Prosser believed the government's Battle for our Birds could turn into the "worst unintentional ecological blunder of modern times".

Mr Prosser believed it risked upsetting the "uneasy equilibrium" between native birds and rats, possums and stoats that have "co-existed" for hundreds of years.