A man found guilty of throwing faeces at a judge previously attempted to do the same to Prince Charles.

At a judge-alone trial today, Castislav 'Sam' Bracanov, 80, was found guilty of throwing horse manure at Judge Anne Kiernan in the Auckland District Court in March this year. 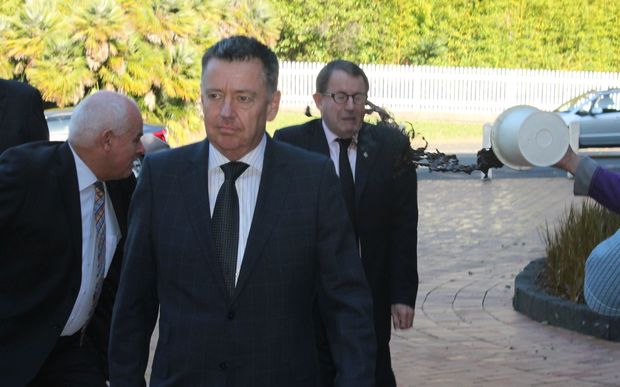 John Banks cops a bucket of mud in the face on the way to court in 2014. Photo: RNZ / Kate Newton

It was not the first time for Bracanov.

Bracanov was fined $400 last year for throwing a bucket of mud at former MP John Banks in 2014, as Mr Banks was walking into the High Court in Auckland.

Judge Kiernan happened to preside over the assault hearing against Bracanov.

He later walked into an unrelated hearing to deliver his scatalogical revenge. 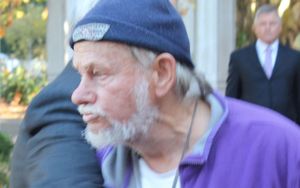 In 2012, Bracanov planned to throw horse manure at Prince Charles and the Duchess of Cornwall when they visited Auckland - but was restrained before he could do so.

He was convicted and fined $200 over that incident.

Prince Charles said in an interview with RNZ after the incident that such things occasionally happened to public figures.

"This man here in Auckland apparently shovelled manure onto the King of Spain's car.

"Apparently he wanted to spray me with air freshener. I haven't decided whether to take it as a compliment or not. These things occasionally happen. It's one of the risks you run."

In court today, Bracanov said he threw the faeces at Judge Kiernan because when he was on trial for assaulting Mr Banks he was not able to speak.

"She let him go before I was able to speak.

"It is people like Mr Banks who are born special in this world - they can do anything, that is not democracy," Mr Bracanov said.

"I am proud of what I did, Banks and her [Judge Kiernan] deserved what they got," Bracanov said.

The officer who restrained Bracanov after he threw the manure gave evidence at today's hearing, reiterating Bracanov's explanation for the assault.

"He told me he threw the horse manure at her because she talked shit, and if you talk shit you get shit."