The man suing Colin Craig for defamation has defended giving blogger Cameron Slater a copy of a poem the former Conservative Party leader had written for his press secretary. 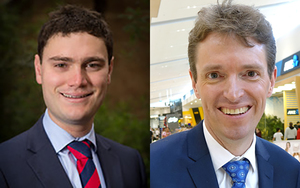 Taxpayers' Union executive director Jordan Williams is suing Mr Craig for defamation over comments he made at a news conference and in a widely distributed leaflet in July last year.

Mr Williams has told the High Court in Auckland that Mr Craig's comments suggested Mr Williams had been dishonest and made up allegations about why Mr Craig's press secretary Rachel MacGregor had left her job.

Under cross-examination by defence lawyer Stephen Mills QC today, Mr Williams denied that he was trying to undermine Mr Craig by giving the poem to Mr Slater.

He said he was trying to set the record straight for Ms MacGregor's benefit.

The jury was told Mr Williams sent the poem to Mr Slater after he became aware the Whale Oil blogger was planning to publish a story suggesting Ms MacGregor was obsessed with Mr Craig and that there had been a sexual relationship.

But Mr Mills pressed Mr Williams on whether his actions really were in Ms MacGregor's interests, given the media firestorm the publication of the poem caused.

The poem was published the same day Mr Craig stepped down as the leader of the Conservative Party.

Earlier, Mr Williams was questioned over why he breached an assurance of confidentiality he gave to Ms MacGregor and met with two Conservative Party board members, and told them about letters and texts Mr Craig was said to have sent to his former press secretary.

The jury was told Mr Williams had previously given an assurance to Ms MacGregor and her lawyer he would keep the intimate material confidential.

Mr Williams said he anguished over the decision to meet with the board members.

However, he said he was concerned following a media interview Mr Craig gave in a sauna.