Colin Craig contemplated buying his press secretary jewellery and told her she had "healing hands", a jury has been told. 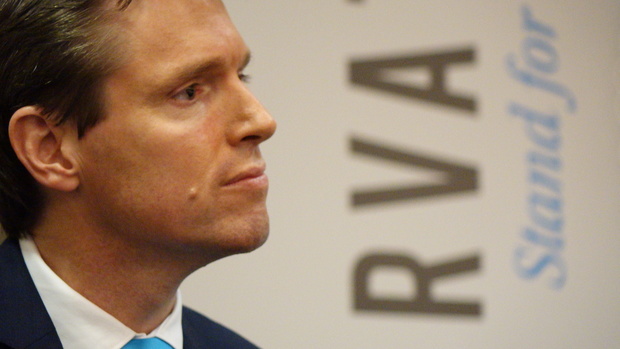 Letters and poems Colin Craig allegedly wrote to his press secretary have been read out in court. Photo: RNZ / Kim Baker Wilson

The former Conservative Party leader is being sued for defamation by Taxpayers' Union executive director Jordan Williams over comments he made at a news conference and in a widely distributed leaflet in July last year.

Mr Williams has told the High Court in Auckland that the comments suggested Mr Williams been dishonest and had made up allegations about why Mr Craig's press secretary Rachel MacGregor had left her job.

Yesterday he detailed accusations that Mr Craig had sexually harassed Ms MacGregor, forcing her to leave.

Ms MacGregor had confided in him about sexually explicit text messages and letters Mr Craig had sent her, Mr Williams said.

This morning, Mr Williams read a letter to the court that Mr Craig allegedly sent to Ms MacGregor in late 2013, telling her that he had needed her more that year than he had expected.

Mr Craig said he had been experiencing back pain and that he had benefited from Ms MacGregor's "healing hands".

In the letter, Mr Craig also urged Ms MacGregor to be by his side for the 2014 election, Mr Williams said.

He had also considered buying her a "super present", like a piece of jewellery.

In one poem, Mr Craig implied that he wished he was two men and could be in a relationship with Ms MacGregor, Mr Williams said.

In a section of the poem titled 'beautiful', which the letter said Ms MacGregor could skip if she thought it was inappropriate, Mr Craig allegedly wrote: "You look unbelievably good in your new dress. Your lips are so amazing to kiss. Your skin is so soft. You are wonderful because you have the most beautiful ... (lol)."

Ms Rankin said she had raised the issue of Mr Craig's relationship with Ms MacGregor with him on several occasions.

She said Mr Craig swore to her there was nothing going on and she thought he was a decent and moral man.

But she said she has since realised she was wrong to support him.

She did not initially believe stories about Mr Craig sexually harassing Ms MacGregor, because he had told her Ms MacGregor had mental health issues that he and his wife were trying to manage.

Mr Craig told her he loved Ms MacGregor like a sister and that he would hug or hold her when she was upset, Ms Rankin said.

He admitted to her that he kissed Ms MacGregor on election night in 2011 but said it was consensual, she said.

Ms Rankin stood down as the party's chief executive in June last year amid renewed allegations about Mr Craig's conduct, in the aftermath of a television interview he gave in a sauna.