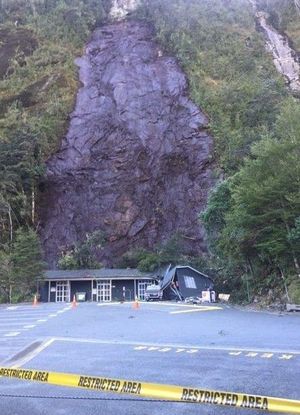 The building was severely damaged in the landslide. Photo: Supplied / Tim Holland

A cluster of landslides came down along the Milford Sound highway at about 10.20am.

The landslides caused major damage to at least one building but the Fire Sevice said no one was injured or trapped.

The area had been isolated and secured, the Fire Service said.

The volunteer Milford Sound emergency response team are trying to contain a gas leak from an LPG tank and a fire engine was on its way from Te Anau.

The avalanche risk was low, it said.

The Department of Conservation said it had sent a senior staff member to the scene to investigate.