A Havelock North woman says many people have lost hundreds of dollars during the gastroenteritis outbreak, and they should receive more compensation.

More than 5000 people became sick during the outbreak - more than a third of the 14,000 town's population - and at least 500 of those cases were confirmed as due to campylobacter.

Jessica Maxwell said she asked Tukituki MP Craig Foss about further compensation at last night's public meeting, but he did not answer.

"People are suffering, I was speaking to a part-time cook, she worked casual, and she was out $400 that week because she wasn't called in. I've spoken to a couple of school principals in Hastings, they had to employ relief teachers because the Havelock North staff were off sick. Now how are those people going to get reimbursed?"

She said $200 in compensation for each household affected by the bug would be a fair solution.

The Hastings District Council said today it would not lift its boil water notice until at least the end of the week.

It said water was not yet flushing completely through the Havelock North reticulation network, and it must wait at least another three days for further testing.

Earlier today, the Hawke's Bay District Health Board met for the first time since people started getting sick earlier this month. 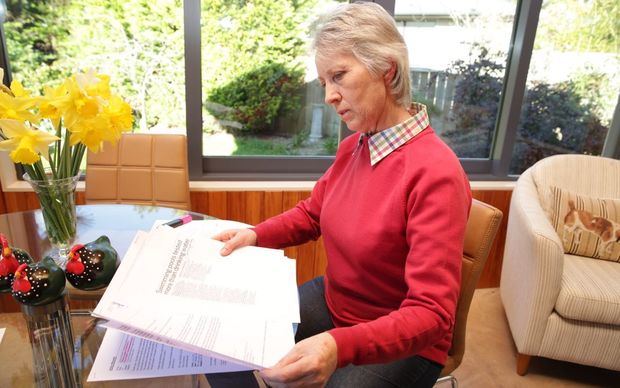 Jessica Maxwell: "How are those people going to get reimbursed?" Photo: RNZ / Rebekah Parsons-King

Chief executive Kevin Snee said he believed the government's inquiry would probably show that there were small problems in the systems and processes used by the DHB, and by the district and regional councils.

He expected this to show that, when aligned, the problems allowed the water supply to become contaminated and people to get sick.

DHB chair Kevin Atkinson said the government's inquiry needed to be expedited, so the rest of the country could learn from the district's handling of the crisis.

A second public meeting was held in Havelock North tonight.