Pavlina Pizova, the Czech tramper who survived a month in a Routeburn Track hut after her partner died, used a file to make snowshoes and walking sticks to try to survive.

Ms Pizova was rescued from the Otago track yesterday, almost a month after her companion Ondrej Petr died.

Watch a video of Pavlina Pizova speaking at a press conference this afternoon here:

Ms Pizova had waited for rescue in a DOC warden's hut near the edge of Lake Mackenzie for nearly a month, while her partner Ondrej Petr lay dead just two kilometres away.

A body believed to be Mr Petr's was recovered from the track this morning.

Attempts to use a helicopter in the recovery effort last night were called off as darkness fell. 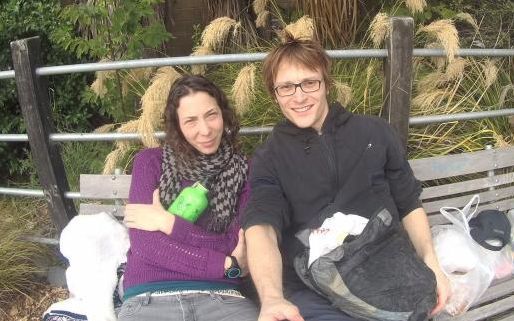 Ms Pavlina made a statement to the media this afternoon and said when they got into the mountains conditions were extreme, with low cloud and heavy snow.

"We were in the open which affected our plans to reach the Mackenzie hut. In our attempt to reach the hut a tragic accident happened when my partner fell and died. After his death it took me two nights in the open before I reached the safety of the hut," she said.

"I have found my own way. During this time I got cold, exhausted and my feet were frozen." 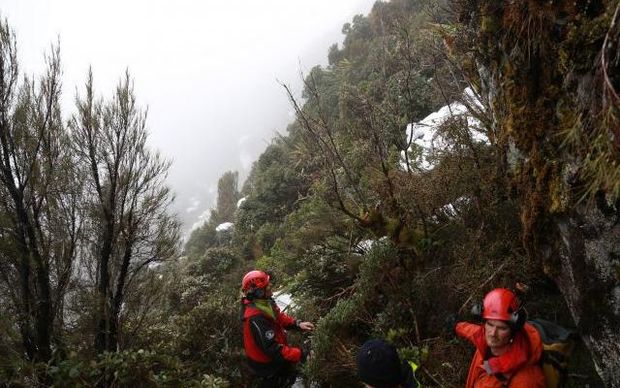 The terrain where the trampers ran into trouble. Photo: NZ Police

She said it was hard going, through waist-deep snow.

"I made a few attempts to walk from the hut but - my fear, and weather conditions and the deep snow discouraged me from doing so," Ms Pizova said.

She said she saw from her position at the hut numerous avalanches coming down the mountains.

Distraught, she struggled to read her statement, but was determined to finish, and thanked police, search and rescue, as well as Honorary Czech consul Vlad'ka Kennett and her husband, who looked after her following the rescue.

Mrs Kennett was with her at the conference.

"Ondrej slipped and fell, Pavlina had slipped behind him and was unable to help him out and that was it," she said. 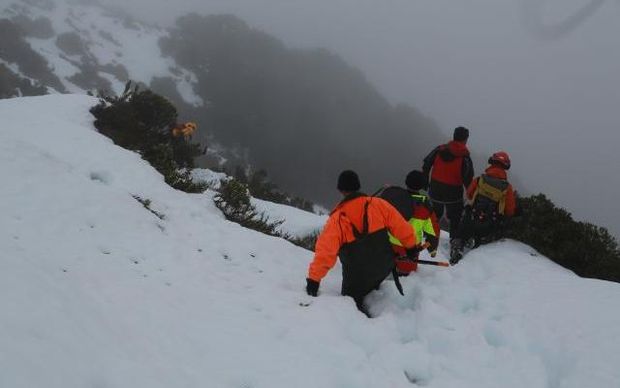 "I think she is a really tough woman, she just tried everything to survive, rubbing her feet and hands, she tried to put everything she could find on her body including a survival blanket."

She said Ms Pizova had made a few attempts to get back on a track, but because of poor visibility she failed to get more than a couple of hundred metres. She eventually found the lake and made her way around it to the huts.

"I give her enormous credit - myself being in search and rescue, she used a file to make whatever she could use, she made some snow shoes, some walking sticks, some of the guys said they were actually pretty good."

She said Ms Pizova initially went into the public hut, but could not make a fire there and thinking she might be able make communications in the wardens hut, she broke into it. 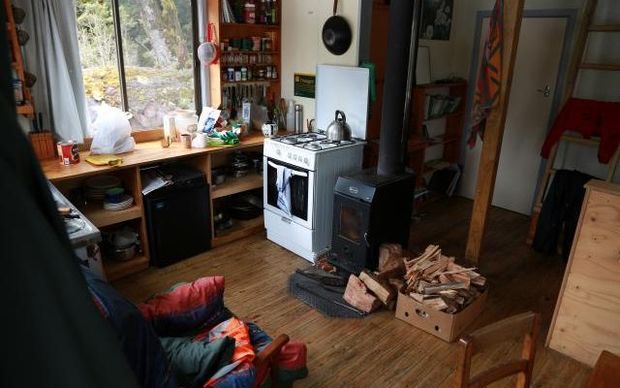 The interior of the warden's hut which Ms Pizova stayed. Photo: NZ Police

"As you can imagine she wants to go home, back to her family."

"Given her experience, and obviously avalanche risk, she decided it was safest for her to remain in the hut and that was the correct decision to make," Mr Jensen said.

DOC Wakatipu operations manager Geoff Owen said the hut would have left her with some resources.

"There would have been some other resources just to keep her warm," he said. 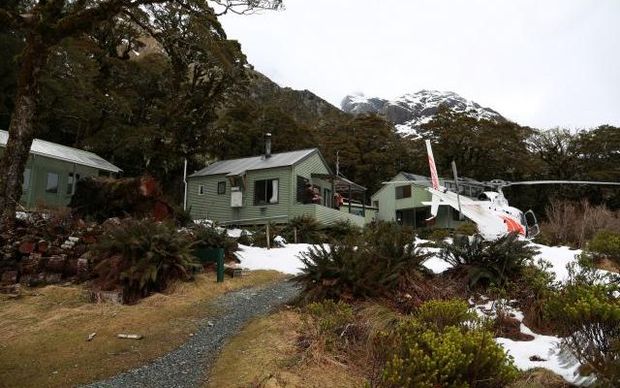 The outside of the warden's hut. Photo: NZ Police

He said staying was the only action she could take and she had shown courage, resilience and common sense.

"Our wardens may or may not have left food behind - we don't encourage food to be left up over the tracks over the winter months simply because of the rodent issue.

"But fortunate too for her I think she was in an area where Ultimate Hikes operate a lodge and that's a bit more well resourced than our particular hut and it's my understanding she might have made access to that as well." 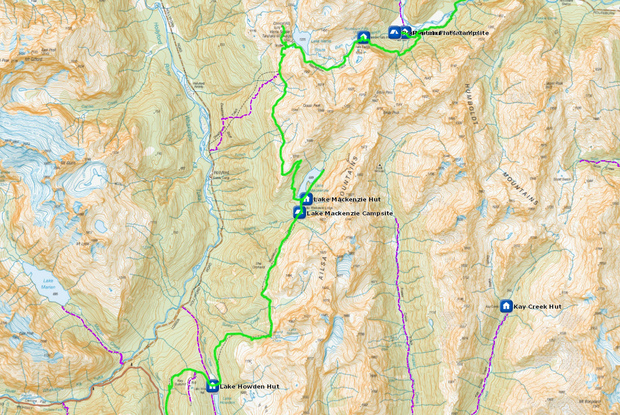 Mr Jensen said she had made efforts to be found, making signs in the snow about seeking help.

"And she actively signalled for the helicopter yesterday when it flew in."

The woman's decision to stay put was the right one given her physical condition and injuries, Mr Jensen said. She had suffered some minor frostbite and mild hypothermia but did not need treatment at hospital.

DOC staff said the woman was in a remarkable condition given her ordeal. 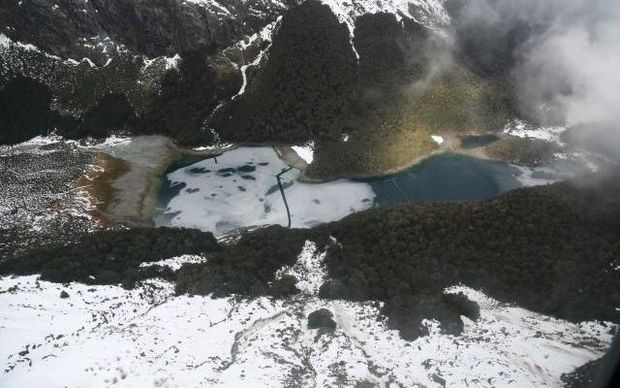 The area where the Czech woman was trapped for almost a month. Photo: NZ Police

Mr Owen said rangers would secure the warden's hut once police completed their scene examination. DOC will carry out an operational review after the incident. 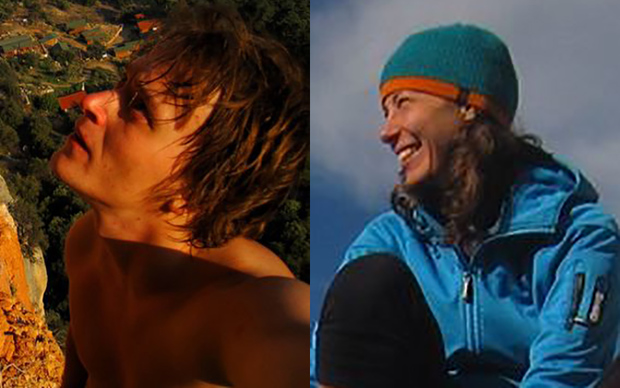 As you can imagine the last month was very harrowing for me and my partner's families.

There is not enough space and it is not appropriate at this time to go into details, but I'd like to take this opportunity to just briefly explain our actions.

The conditions were extreme, we encountered heavy snow fall and low cloud which contributed to our enforced overnighting in the open which affected our plans to reach Lake McKenzie Hut.

In our attempt to reach the hut the tragic accident happened when my partner fell and died.

After his death it took me another two nights out in the open before I reached the safety of the hut.

The recent heavy snows meant I was walking through waist-deep snow and because all track markers were covered, I had to find my own way.

During this time I got extremely cold, exhausted, and my feet were frozen.

At the hut, considering my physical health, the deep snow conditions, knowing there were avalanche paths ahead of me, I knew it was best to stay in the safe place.

I made a few attempts to walk out from the hut, but my feet, the weather conditions and the deep snow discouraged me from doing so.

At the hut I saw numerous avalanches coming down.

I would like to use this opportunity to pass a strong message on to anyone intending to travel in the New Zealand mountains to seek very good information and mainly respect the winter conditions and quickly changing weather.

I am aware we made a few mistakes - not leaving our intentions with somebody, not carrying a PLB and underestimating the winter conditions on the track.

All these aspects contributed to our tragedy.

I would like to thank the New Zealand Land SAR, the local Police and DOC for their effort to bring me to safety.

Especially I'd like to thank Vladka and Richard Kennett for their help and assistance on the personal basis and helping our families to get through all this.