One of the students who helped drive a petition calling for a national commemoration day for the NZ Wars is elated the government is backing the call. 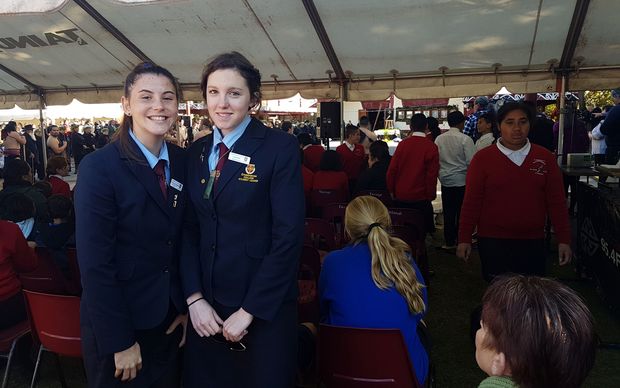 Yesterday at Turangawaewae Marae, the Crown handed ownership of the Rangiriri pā site back to Waikato-Tainui, and the government acknowledged the need for a national day to commemorate the wars 150 years ago.

The land titles were handed back to to Rangiriri Pā and Te Wheoro's Redoubt in a special ceremony to the Māori King.

During yesterday's events both ministers acknowledged there should be a day to remember the New Zealand Wars, just as the World Wars were marked.

A petition calling for such a day was presented to Parliament last year and Otorohanga College students Leah Bell and Waimarama Anderson reinforced the aim of their 12,000 strong petition to the Maori Affairs Select Committee earlier this year.

Ms Bell, the school's head girl, was at Rangiriri yesterday and said the experience helped her understand further the immensity of having a day of commemoration, and for others to learn about it.

"It's hard to explain, we have seen it from the very start when we were just on the streets petitioning, we didn't know it would get this far."

It was an amazing part of New Zealand's bicultural story, she said.

"I think as I get older, and my friends get older, I think we will understand more how amazing it was to be part of such a huge kaupapa. When our children learn about the land wars at primary school, which is what we missed out on, and have a day where our children and mokopuna explore our history and learn about who we are, to know I was a part of that is a huge privilege."

A teacher at Otorohanga College, Linda Campbell, has been involved since the beginning of the petition's journey.

"Yesterday was so moving, it was about Rangiriri, and also the graciousness of the people and the support for the petition and the constant acknowledgement of the work that had gone into the petition and what it means."

Having a day to commemorate the land wars was utterly important, Miss Campbell said.

"It needs to be a top-tier level public holiday for us to truly have the time to really as a nation move forward and have that time every year to annually commemorate who we are and where we come from and who we want to be."

Miss Campbell said it took two years to get the petition done and it was in the hands of the iwi chairs, government and the select committee hearing process, which was still going. She said their part was done, but what would happen next would be really interesting.

Māori Development Minister Te Ururoa Flavell said for the past two years presentations had been made by iwi to him - and his predecessor Sir Pita Sharples - about setting aside a date to commemorate the wars.

He said the Māori Party had been given the hard word to deliver and the petition by Otorohanga students added to that.

In this year's budget, $4 million of funding was earmarked for initiatives to commemorate the country's land wars.

There was a meeting with some iwi leaders about setting aside a day for the commemorations four months ago in Auckland.

"I can say there will not be a holiday, as a declaration from the Prime Minister, but a date can be set aside," Mr Flavell said.

He said some iwi leaders had accepted that, even if the lack of a public holiday could be seen as the government not taking it seriously.

He said that could potentially change in the future.

"There is so much history involved in every one of them. from Pukehinahina, through to Rangiowhia, through to Ōrākau, through to Rangiriri, through to Ruapekapeka. Throughout the country these events are hugely significant for each of those rohe (areas) and I think the government acknowledges that.

"Going to a holiday takes it to another par, simply because there are already a number of holidays already acknowledged throughout the country and of course there are all sorts of other connotations in respect for work and employment and whether people will take it seriously."

Mr Flavell believed there may come a time in the future that people would be at that level of acknowledgement, as was done for ANZAC, but right now a day just needed to be put aside.

Another meeting with involved iwi leaders is expected to be planned where a day is likely to be decide, as the onus was now on the iwi to put aside a day that suited everyone, Mr Flavell said.