Midwifery will struggle to remain a viable career option for young people unless pay increases, some midwives say.

Midwives marched through Wellington today to raise awareness of their earning concerns and an ongoing pay parity dispute with the Ministry of Health. 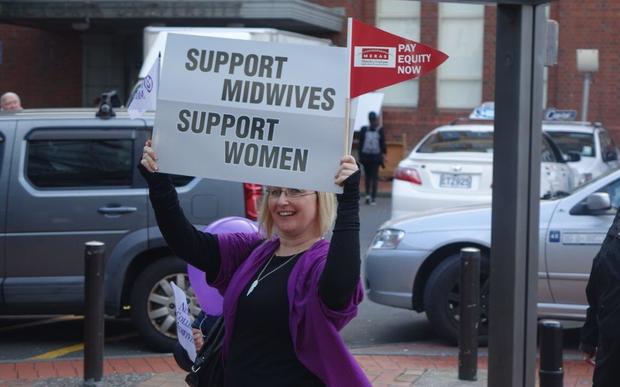 Midwives marched through Wellington today to raise awareness of their pay dispute with the Ministry of Health. Photo: RNZ /Emile Donovan

An historic legal case taken by the New Zealand College of Midwives against the Ministry of Health over pay equity was on hold last week, after the government made an 11th-hour offer of mediation.

The dispute began in August 2015, when the college filed a claim against the ministry, alleging pay discrimination on the basis of gender.

A hearing was scheduled in the High Court in Wellington for 15 August 2016, but was postponed when the ministry offered to mediate late last week.

Figures provided by a spokesperson for the College of Midwives showed the average pay for a lead maternity carer - who are usually self-employed - was just over $53,000, after expenses and before tax.

Midwives employed by district health boards earned between $47,000 and $70,000 per year, according to the Careers NZ website. 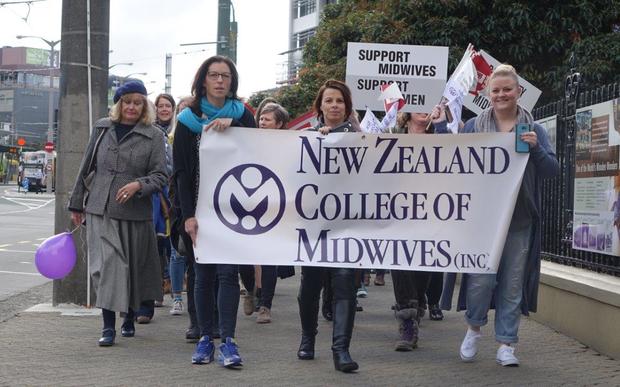 Some of today's marchers said unless pay rates were increased, the profession would struggle to attract new midwives, given the job's considerable responsibility, the high culpability for midwives when things go wrong and the 24/7 nature of the work.

A midwife and midwifery lecturer at Otago Polytechnic, Bridie Foster, said while she was glad the ministry had offered mediation, she was worried it was a delaying tactic.

"I'm not sure whether it's a delaying tactic by the Ministry of Health ... I'm just very hopeful that we can come to some kind of agreement," she said.

A new mother, Rachel Swindells, said she had recently given birth at home, attended by two midwives, with whom she had an extremely personal relationship during pregnancy.

"I actually had quite bad anxiety, and so I ended up having quite a lot more contact than most women would traditionally have.

"I cannot say highly enough how significant that was for me. As a first-time mum, being very nervous, knowing that there was somebody at the end of the phone 24/7... that meant heaps, knowing that I could always get in touch with them."

Negotiations will take place over the next few days, but the College of Midwives has retained the right to return to court should no resolution be achieved within three months.