Wahakura, or pepi pods, for young babies will continue to be funded in Northland, despite Ministry of Health uncertainty over their effectiveness.

Northland DHB encourages the use of pepi pods in a video ad:

The Northland District Health Board gives out 180 of the woven flax bassinets a year to the parents of newborns who might be at risk of Sudden Unexpected Death in Infancy (SUDI).

Because SUDI rates are much higher for Māori infants, it prioritises Māori babies from its Special Care Baby Unit.

It said the region was losing up to 10 babies a year to SUDI before 2013, when it rolled out its SUDI prevention programme, and most of them were Māori. That figure has now dropped to about three a year.

The Ministry of Health has argued there is not enough scientific evidence to fund the annual cost of $1.5 million for the project, despite no cases of SUDI in a wahakura or pepi pod.

It was waiting for quality research that shows the benefits of the pepi pods, before deciding whether to fund them, it said.

Northland DHB Child Health Services general manager Jeannette Wedding said death rates in babies under three months had dropped by 60 percent since the introduction of the SUDI prevention programme, and pepi pods were a key component of that programme. 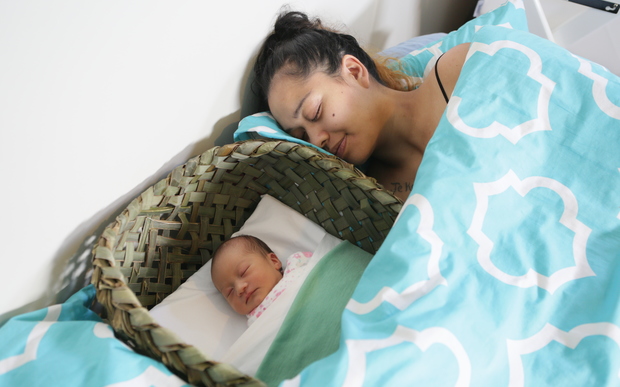 "Bed-sharing for parents with a young baby is a cultural norm for some Māori whānau.

"As there is such significant inequity between Māori and non-Māori in Northland's SUDI rates, the priority has been to find prevention measures that are culturally appropriate."

Ms Wedding said instruction and promotion of the weaving of wahakura had been included in the awareness-raising programme led by Māori midwives, and more than 40 marae had taken part.

The programme also advised whānau about the risks to babies of maternal smoking and bed-sharing.

"The wahakura, or pods, give babies a safe sleeping-space in the parents' bed," Ms Wedding said.

The project leader, Jacqui Western, said the weaving of wahakura had been crucial in getting the message across about the risk factors for SUDI.

"The approach here has been very much a discussion forum led by Māori midwives who have expert information about SUDI risk, and people of all generations who have lost babies, and we've utilised weaving as a component of these wananga," she said.

"Māori people relate to weaving and its importance and the weaving of safe sleep-spaces, you know, it resonates. It becomes a tangible and very real expression of these key messages around protecting babies. I think it's quite powerful."

Many of the baskets are woven at marae-based wananga or learning seminars about SUDI  led by Māori midwives across the region.

The DHB has also commissioned Safe Sleep video ads promoting the use of the co-sleeping pods, and other risk-reducing measures including breast-feeding.