A transgender student at New Plymouth Girls' High School is calling for pants to be included as part of the official school uniform. 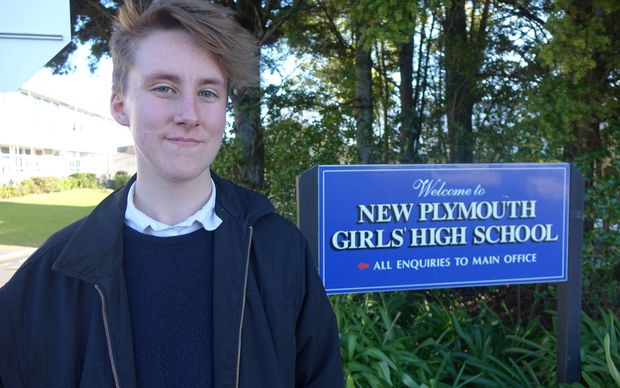 Theo Cook is allowed to wear pants to school, but says getting permission to do so has been a painful experience that no other person should have to go through.

The Year 13 student came out as transgender about a year and a half ago and now sports a stylish short haircut and is undergoing hormone treatment.

Theo had been able to wear pants for about a term but, prior to that, the school insisted they wear a skirt regardless of how uncomfortable it made them feel.

"I think it took a bit to kind of get used to it and kind of understand that this is my quite fundamental human right to just be comfortable and wear what I want to school because I am trans.

"It's just more that it was a very stressful and drawn-out process."

After considering enrolling as a boy at another school, the 17-year-old decided to stay at Girls' High because they believed it was a good school and all their mates were there.

But, to advocate for change, Theo started an online petition last week calling for pants to be included in the school's dress code - and more than 770 people had signed up so far.

Theo said the petition was about the school being more gender neutral and safer for trans students in the future, and allowing pants was a simple and practical first step.

"I've dealt with a lot of depression and nasty stuff like that, so I guess for me I'm just kind of doing what I have to do each day to feel comfortable and I know lots of people aren't going to agree.

"But I just want to make it easier for other people so they don't feel quite as down as I did at times."

Board of trustees chair Loretta Roberts was not aware of any formal approach to change the dresscode. 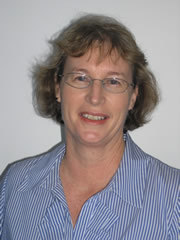 "There was one student at the end of last term who met with the senior school management who did request to wear trousers to school and arrangements were made for that student.

"From my understanding it was a very amicable solution for both parties."

Ms Roberts was not willing to discuss the merits of including pants in the official uniform and how that might improve the experience of transgender students at the school, preferring instead to outline the process for making any change to the dresscode.

"There are avenues to raise any issue in terms of, you know, school environment, uniform, canteen.

"Bring the issue in correctly either to the student council or to the board and certainly, you know, we will have a conversation and look at how best to find a solution."

Among students outside school today, there was a lot of support for Theo and the inclusion of pants in the school uniform - for a variety of reasons.

"I think it's really great for the LGBTA students in New Plymouth Girls' High School and even the non-LGBTA students as well, because if you give transgender students the ability to wear pants it will make them feel more comfortable in their identity and in themselves." 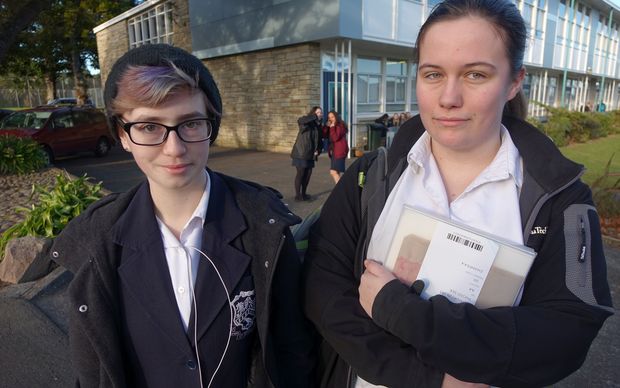 "First off these skirts, the senior ones especially, are really, really impractical. You've got to spend, like, every second trying to pull them up because they just ride up, and the split's way too high.

"And then you've got the LGBT stuff, where to misgender-assign someone every day by wearing a skirt where they have to. It's just demeaning to their personal identity."

Year 12 student Willow Kingi-Laurence had a live and let live take on the issue. 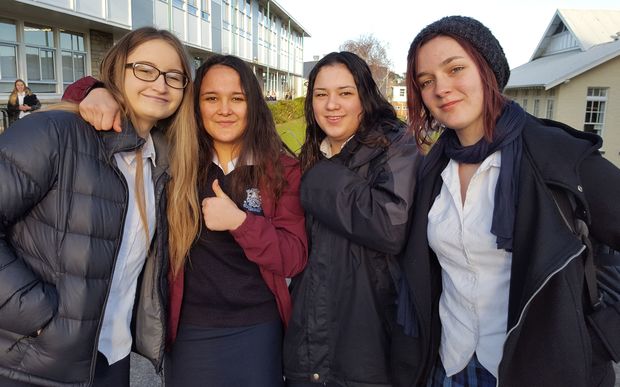 Year 12 student Willow Kingi-Laurence, second left, and her mates are OK with pants, but she'll be sticking with a skirt. Photo: RNZ / Robin Martin

"I don't think it should be compulsory for all of us to wear pants but if they want to wear pants they can, I'm just going to go about and wear my skirt, you know.

"It just depends on the pants. You don't want to introduce pants that are going to make the school look not as classy as it's supposed to look. You'd want dressy pants I guess."

Theo planned to discuss the petition with the student council next week before presenting it to the school's board of trustees by the end of the term.