The huge snowstorm over the weekend has left the electricity network in part of the central North Island looking like a "war zone", says a lines company. 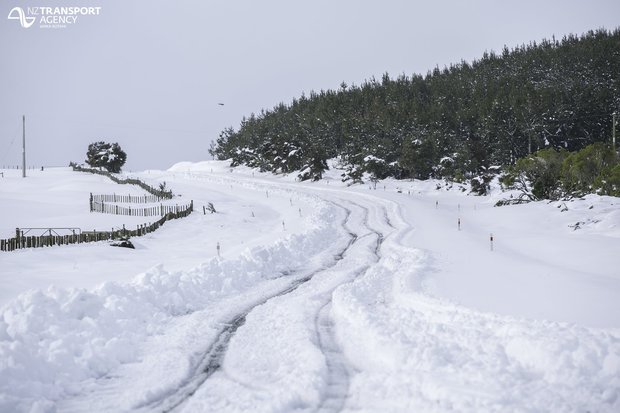 Up to 60cm of snow fell on the Napier-Taupo Road (State Highway 5) over the weekend. Photo: Supplied/ NZTA

Heavy snow over the weekend brought down hundreds of power poles, cutting electricity to 400 rural homes in the Taupō plains and Hawke's Bay regions.

Unison Networks spokesperson Danny Gough told Checkpoint with John Campbell that the lines company had a mammoth task ahead.

Mr Gough said the 300 power poles that were down in Hawke's Bay and on the Taupō plains could take up to a month to fix.

Unison would bring in more than 100 people to work in the affected area, which has a 60km radius.

Mr Gough said the outages were caused by more than 1m of heavy, wet snow.

The hardwood and concrete poles buckled and broke like twigs under the weight on the lines, he said.

"Even the steel-reinforced ones have just buckled and gone."

Unison was likely to bring in generators to provide power while repairs were under way.

In another sign of progress, the Napier-Taupō highway re-opened late this morning.

However progress in the Taupō and Rangitaiki areas looked likely to be slower, with some access roads still blocked by snow half a metre thick.

A farming official said central North Island farmers hit by the heavy snow were stressed and having to get food to stock by helicopter.

Federated Farmers Hawke's Bay president Will Foley said some farmers were having to transport hay by helicopter to stock in remote areas where road access is blocked.

In Taupō, provincial president Alan Wills said many farmers were living without heating and working overtime.

"Federated Farmers are going to try and get some teams of people to go in to help with milking so that staff can have some time off. It's probably one of the real concerns, that staff are not getting any time off permitted. It's a real drudgery, they're not just competing with the cold and there's snow everywhere, and potentially there is a fair bit of stress there.