Two new studies estimate 20 times more dolphins might be killed by the fishing industry than is reported, and say the government should be doing more to protect Māui's dolphins. 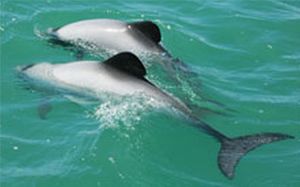 A report by Otago University scientists found although 48 dolphins were reported entangled and killed in fishing nets between 2000 and 2006, the actual number might have been as high as 1050.

"The reported bycatch of New Zealand dolphin substantially understates the actual level of bycatch, due to very low levels of self-reporting by fishermen and low observer coverage," it said.

"To date, all research on the potential impact of fisheries mortalities on Hector's and Māui dolphin populations has essentially had to rely on the results of one unreplicated observer programme off the east coast of the South Island."

The report has been given to the International Whaling Commission, which has conducted research of its own that is critical of the government.

Its scientific committee has expressed "grave concern" about the protection of the Māui's dolphin, and said the government had not done enough since 2013.

"Given the information presented this year, the committee concludes, as it has repeatedly in the past, that existing management measures in relation to bycatch mitigation fall short of what has been recommended previously and expresses continued grave concern over the status of this small, severely depleted subspecies," it said.

Greenpeace executive director Russel Norman said the government was in denial about the threats to the dolphins.

"There's so little monitoring of what's going on out there - in the habitat of particularly Māui dolphins, we have to stop using [particular] methods of fishing. And we know what they are, they're gill nets and they're trawling," he said.

"We know that dolphins hate the seismic activity that the oil exploration industry does."

In response, the office of the Conservation Minister said said there had been no reported deaths of Māui's dolphins since 2002 and it would publish an “encouraging” revised population estimate in October.

“Observers encountered a greater average number of groups of Māui dolphins than in previous years,” it said.

It maintained protecting the critically endangered species was a high priority.

"New work planned for the coming year includes deployment of acoustic monitors to monitor the off-shore and along-shore presence of the dolphins in areas where they might still be at risk," it said.

"The ongoing research and recovery work will contribute to the review of the Hector and Māui Dolphin Threat Management Plan, scheduled for 2018.

"The major threat to the dolphins is fishing, but the government also introduced a seismic testing code of conduct to protect dolphins from any risk oil and gas exploration off the West Coast of the North Island could pose."