The quest for a selfie with a cute animal ended tragically, when a crowd of tourists manhandled a small dolphin to death in Argentina. 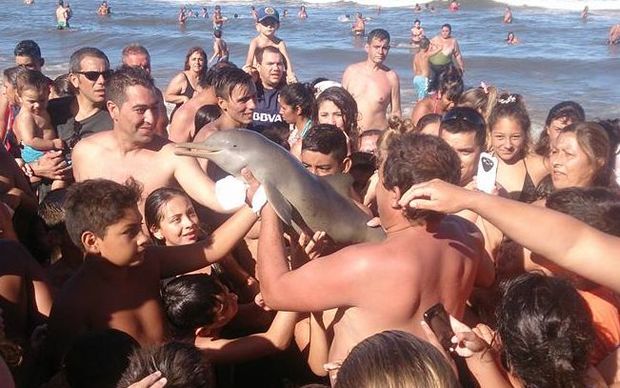 The dolphin was paraded about while tourists took photos. Photo: FACEBOOK/Hernan Coria

The dolphin died after being handled by a large crowd of beachgoers in Buenos Aires.

A Franciscana dolphin, about the same size as New Zealand's Hector's dolphin, was picked out of the ocean and paraded around so camera-wielding tourists could take a closer look.

The incident occurred last week at a Buenos Aires resort, where two dolphins were reportedly yanked out of the ocean.

An Argentine Wildlife Foundation spokeswoman said at least one of the animals had died.

A spokeswoman for Australia's arm of World Animal Protection condemned the behaviour of the beachgoers who "used the animals for entertainment purposes".

"This terribly unfortunate event is an example of the casual cruelty people can inflict when they use animals for entertainment purposes, without thinking of the animal's needs," she told the ABC.

"At least one of these dolphins suffered a horrific, traumatic and utterly unnecessary death, for the sake of a few photographs.

"Wild animals are not toys or photo props. They should be appreciated - and left alone - in the wild where they belong."

But, like other dolphins, Franciscanas cannot remain out of water for long.

"They have very thick and greasy skin that provides warmth, so the weather will quickly cause dehydration and death," the spokeswoman said.

Franciscana dolphins were usually found in Argentina, Uruguay and Brazil, and were vulnerable to extinction, according to the International Union for Conservation of Nature.