Florida shootings - About 200 people have gathered in Wellington for a candlelight vigil to support the victims of the Orlando massacre.

A 29-year-old American, Omar Mateen, killed 50 people and wounded 53 more when he opened fire on gay nightclub Pulse in the central Florida city in the early hours of Sunday, before being shot dead by police.

The attack was the deadliest mass shooting in recent US history.

More on the Florida shootings

The so-called Islamic State group has said it was behind it, but the extent of its involvement is not clear.

US President Barack Obama described the attack as "an act of terror and an act of hate", and New Zealand Prime Minister John Key joined other world leaders in expressing sympathy for the victims.

Wellington mayor Celia Wade-Brown told the crowd gathered for the vigil that although the tragedy happened so far away, it was felt keenly in the city.

"We can't fight hate with hate - love is stronger," she said.

The capital city's Michael Fowler Centre has been lit in the colours of the rainbow this evening, as has Auckland's Sky Tower.

"The rainbow is a symbol of hope and diversity and, in this case, it represents diversity of gender, but also supports diversity of ethnicity and belief systems and we're richer if we celebrate those differences, rather than condemn them," Ms Wade-Brown said.

She said she expressed her deepest sympathies to the families and friends of the victims.

US Ambassador to New Zealand Mark Gilbert also spoke at the vigil.

"On behalf of President Barack Obama and the people of the United States, I'd like to thank you for being here tonight and showing your solidarity with the people of Orlando," he said.

"I thank you for the outpouring of support we've received throughout New Zealand from old friends and new friends." 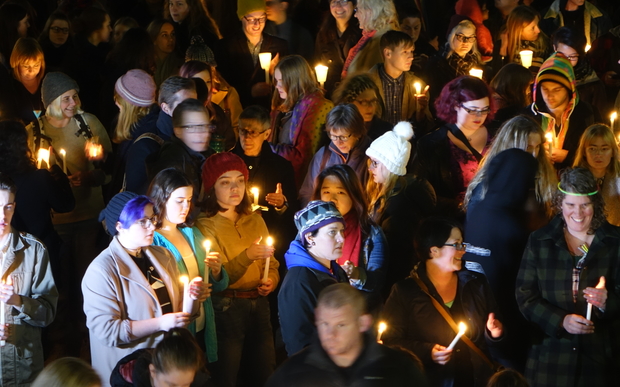 A crowd gathers, holding candles, at the vigil for the Orlando victims in Wellington. Photo: RNZ / Jonathan Mitchell