The job of cutting down re-offending is taking longer than planned, the Corrections Minister says. 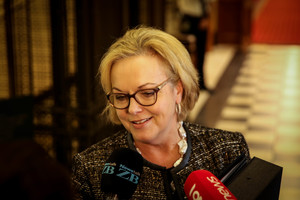 The Corrections Department has a goal of cutting re-offending rates by 25 percent from 2011 levels by next year.

However as of December, the rate of re-offending had fallen by less than 7 percent.

The minister, Judith Collins, said she expected the goal would be achieved but it would take longer than planned.

Despite the slow reduction in offences, she said the number of people re-offending had decreased by 25 percent.

She said the problem was a small group of people offending more often and more seriously.

But Labour's corrections spokesperson Kelvin Davis said the rehabilitation programmes within prisons simply were not working and should be reassessed.

"In Corrections it just seems that they just persevere with programmes, tell everybody that they're implementing all these programmes, at the expense of millions of taxpayers' dollars I might add, and really put the blame on offenders if they don't change their ways, rather than saying well maybe it's just our programmes that aren't working."