A ban on some campervan liveries is not about stopping humorous messages, but stopping businesses exploiting or injuring the community, says the chief censor. 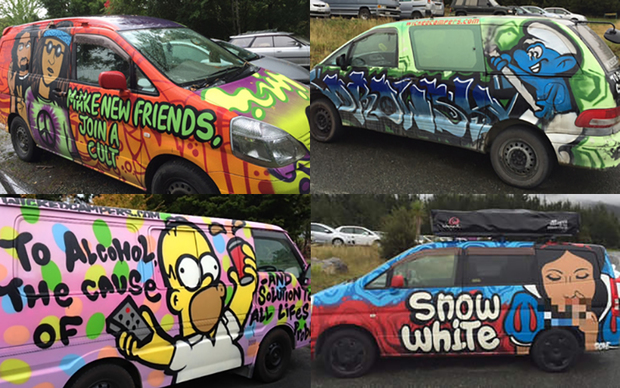 A Wicked Campers van featuring a Japanese sexual term was found to be objectionable after police laid a complaint.

Chief censor Andrew Jack told Morning Report today companies were allowed to advertise themselves, but it was not okay to make a joke out of something that degraded women.

"What we are trying to do is make sure that when people are doing that, they're not actually exploiting the New Zealand community and causing injury or harm to the country that we all live in, in the interest of making a buck."

It is the fourth campervan to be banned.

Wicked Campers faces fines of up to $200,000 if the designs are displayed again.

But during yesterday's decisions, the Chief Censor also turned down two police complaints about Wicked Campervan slogans, although one of the vehicles was described as "undeniably offensive and highly inappropriate".

One of the vans showed Smurfs with a cannabis cigarette, with the classification office ruling that the representation was not particularly humorous or celebratory. "The so-called cigarette is a very large and quite odd looking depiction, and the smurf is holding it in a manner that does not immediately suggest he is smoking it," said the ruling.

The second featured Mr Burns from the cartoon series The Simpsons holding a bong and saying: "And this whole time I've been smoking harmless tobacco".

On the other side of the second van, Homer Simpson was shown drinking beer with the slogan: "To alcohol, the cause of - and solution to - all life's problems".

A sexual joke is painted on the rear of the vehicle.

The classification office said that unlike the text and images on the previously classified Wicked Campers vehicles, "where there was a clearly promotional aspect, there are no strongly credible references to cannabis, or to any other illegal drug" on either van.

"While the Classification Office must be concerned about any potential use of favourite television characters to promote or encourage criminal acts, in this case the link to drug use is tenuous," its decision about the second vehicle said.

"The sexual joke on the back of the campervan has been considered under s3A, which allows an age-related restriction for offensive language that is likely to cause serious harm to those under a specified age.

"The language on the back of the van is undeniably offensive and highly inappropriate for a campervan. However, the Office can only restrict or ban a publication if there is likely to be serious injury to the public good."

There are limits - Mayor

Meanwhile, a council which banned the offensive slogans on campervans in its district has welcomed the latest decision by the chief censor.

Whangarei District Mayor Sheryl Mai said Wicked Campers needed to realise there were limits on what was acceptable as a slogan on a vehicle.

"Fill their boots with irony, with pithy comments, with humour, but take away the really disgusting innuendo, so anything with drugs or sexuality or Disney characters, and the misogyny just does not belong here."

She said the council had tried very hard to contact the company without luck, and that the vans' renters may be steering clear of Whangarei, as the council had not had any complaints about offensive signage since its bylaw came into force this year.