Thunderstorms brought down trees around the upper North Island overnight, although a severe storm watch has now been lifted in Auckland. 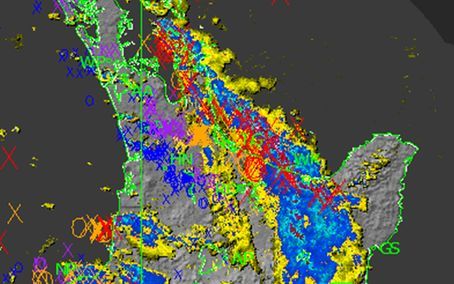 A map of lightning strikes from last night, created by MetService from Transpower data. Photo: Metservice

Strong winds are still gusting around the country and NZTA has warned motorists to take extra care when driving over the Auckland Harbour Bridge.

Weatherwatch said a strong southwesterly airflow should ease over the country this morning, bringing most regions some settled weather for a brief time, after any morning showers cleared away.

The Fire Service was called out to about a dozen calls for fallen trees and other weather-related incidents in the upper North Island overnight.

Auckland, Waikato, Waitomo and Bay of Plenty were hit by storms, although the severe thunderstorm watch has now been lifted in the Auckland region.

@WeatherWatchNZ this was Cambridge earlier. Awesome show from Mother Nature! More of this to come later? #Waikato pic.twitter.com/3PmqRFX0gf

A second front is expected to bring more wild weather on Wednesday, according to the MetService.

Meteorologist Tom Adams said yesterday that the next front was forecast to follow a similar pattern of northwest gales and heavy rain in the west.

"The rapid succession of fronts this week means that conditions will change rapidly, and potentially dangerously. Checking the latest forecast and warnings will be especially important in this dynamic weather pattern."