Winter is fast approaching - and so is the flu season - and if you're thinking of getting a flu jab you might want to book the appointment for before lunch. 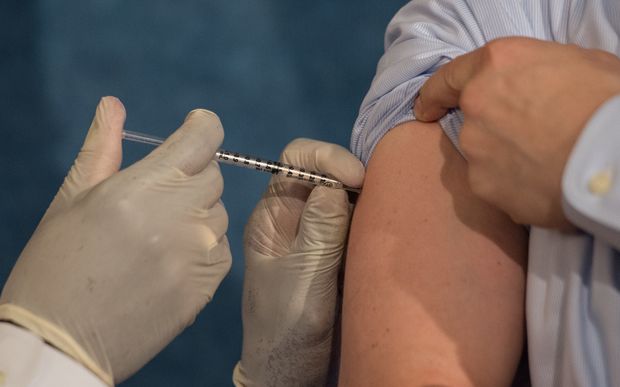 The Birmingham University study found more antibodies were produced in people who'd been vaccinated in the morning. Photo: AFP

International research suggests people vaccinated in the morning are better protected from influenza than those given their flu shot in the afternoon.

The study by the University of Birmingham surveyed 276 people in Britain, aged over 65, who were vaccinated against three strains of influenza between 2011 and 2013.

One month later, patients vaccinated in the morning had produced significantly more antibodies against two of the three flu strains in the jab.

Similar antibody levels were produced for the third strain, the results in the journal Vaccine showed.

"There's a lot of things that affect our immune response to something on any given day.

"For example if people are really stressed out that affects the way they respond to vaccines, we know that circadian rhythms have an effect so I guess this is entirely believable and plausible."

"What this suggest is that it's entirely possible because it looked like people had a better response to a vaccine in terms of their antibodies."

The Ministry of Health said more than 1 million doses of the vaccine were distributed last year and over 850,000 doses have been given out this year to date.

An Auckland GP, Dr Janine Bycroft, said 10 percent to 20 percent of New Zealanders get the flu every year.

While the international research was interesting there would be no rush to switch to morning vaccinations only, she said.

"That's still very early days - it's one study, 276 adults over 65 and a cluster-randomised trial, so at this stage I would classify it as interesting but not something we would be changing practice in relation too.

"It needs more research, the immune system is incredibly complex and it'll be really important for them to do some follow on studies just to tease out if there was a true difference or not."

The researchers aren't stopping with the timing of flu jabs; they're now looking to see if the morning strategy will work for vaccines that protect against pneumonia.