The last painting by New Zealand artist Charles Fredrick Goldie has sold for $1.175 million to a phone bidder at auction in Auckland.

The 1941 oil portrait of Wharekauri Tahuna, believed to be Goldie's last major work before he died, went under the hammer tonight at the International Art Centre in Auckland.

Wharekauri Tahuna was a tohunga, or priest, of Ngāi Tūhoe.

A Noble Relic of a Noble Race was painted the year before Goldie stopped painting and just six years before he died. 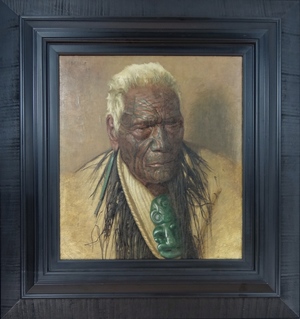 "Thought to have been the last man in the Ureweras to bear full-face moko, he was one of Goldie's favoured subjects and features in a number of notable works completed by the artist throughout his career," the description says.

The centre's director, Richard Thomson, said before the auction that the painting had been owned by a private collection in Auckland.

"Of course it's Goldie's last painting so it's exception for that alone. And you've got to remember it was painted by a 71-year-old artist who had been painting for 50 years, had gone through the Slade school and travelled through Europe and London being taught overseas and here it is, the pinnacle, the last painting. So it's rare and exceptional."

There had been a lot of interest in the auction both from New Zealand and overseas and the painting had been estimated to go for between $800,000 and $1.2m.

"We've had record numbers through at the viewing and we've had a lot of interest in the painting and other paintings in the sale. So we would like to see it sitting somewhere within that estimate, it seems likely and anything above is also possible," Mr Thomson had said.

"It's either going to be someone who is passionate about owning a Goldie, already owns Goldies or always wanted to own a Goldie, and potentially someone looking for a long term investment is another possibility. Of course it'll be someone with deep pockets."

The auction, which included a number of other paintings, started at 6.30pm, with cheers erupting about 7.40pm as the Goldie painting sold.

Standing room only ahead of the sale of Charles F Goldie's 1941 oil painting. Estimated to go for $1.2m @rnz_news pic.twitter.com/SrzZjnrS3v

Just spoke to a couple who are dedicated #Goldie collectors. Both are so gutted their $800k bid didn't get them over the line. #rtpt