A former refugee once accused of spying by Sudan says New Zealand saved him from languishing in detention in Africa. 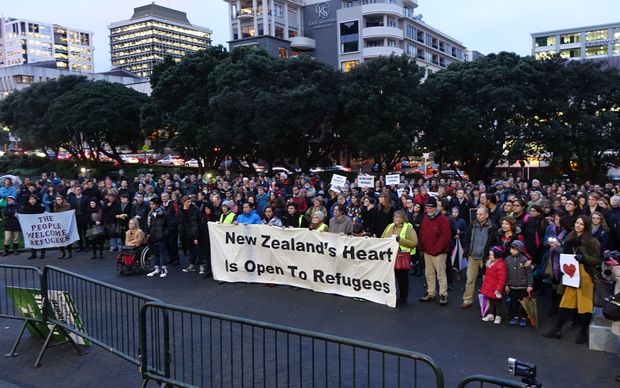 A vigil calling for New Zealand to double its refugee quota outside Parliament in September 2015. Photo: RNZ / Benedict Collins

Ibrahim Omer spoke at a public hearing today at Parliament, where there were calls to double the country's refugee quota.

Community and church leaders, members of refugee communities and campaign groups were among the speakers at the hearing, which was sponsored by United Future leader Peter Dunne.

Mr Omer, who fled Eritrea and faced deportation back there from Sudan in 2008, said his life changed the day New Zealand accepted him under its 750-a-year quota.

Refugees faced huge risks seeking asylum - they would rather die trying to leave than stay for a slow and painful death, he said.

He risked being shot by border officers as he escaped to Sudan.

"I had a very limited options. Either to be shot, or get arrested and to be languishing underground or [in] metal shipping containers somewhere in the desert, or to make it safe to Sudan - that was the third option."

He was then arrested as a spy in Sudan, and faced deportation before New Zealand took him in, he said.

Amnesty International executive director Grant Bayldon said New Zealand liked to think of itself as a good global citizen but that was starting to sound hollow when its acceptance of refugees had fallen to 90th in the world, based on its population.

A spokesperson for refugee advocacy group Doing Our Bit, Murdoch Stephens, said the government should double its funding, and the quota, to make up the 29-year gap when there had been no increase.

Prime Minister John Key said the government needed to consider the capacity needed for resettling more refugees before coming to a decision.

"We have been investing quite strongly in our services in places like Mangere so we've got better capability there," he said.

"We do like to keep a buffer for emergency commitments as we made with the Syrian refugees late last year but it's still too early for me to tell."

Mr Key said the pros and cons of raising the number of refugees would be considered in the next few months as part of New Zealand's three-yearly review of the UN quota.