Prime Minister John Key used to enjoy the celebrations at Te Tii Marae - but a lot can happen in nine years. 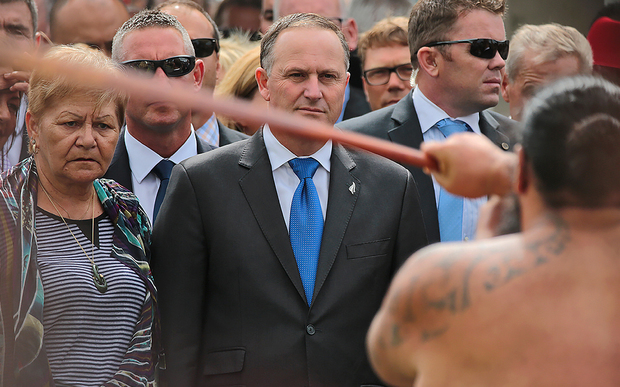 In 2007 Mr Key liked it so much he invited Aroha Ireland, a 12-year-old girl from Owairaka, who lived on a street the then-leader of the opposition said was a 'dead end'. Now, Aroha is living in Australia and Mr Key has refused to come back to Waitangi.

Yesterday, at the eleventh hour, Mr Key pulled the plug on the official powhiri, with his office saying it had had no response to its letter sent to trustees at Te Tii Marae earlier in the day.

"Accordingly, the Prime Minister has decided he will not be attending celebrations in Waitangi this year."

The day before, trustees had sent the Prime Minister's office a letter explaining the protocol of the powhiri; there would be an opportunity for the Prime Minister to speak in the meeting house but without any political address.

Political speeches would be held in the political forum tent, where there was more room. The explanation given was: "because of the converging Trans-Pacific Partnership (TPP) protests from Auckland and the north and their focus on airing their grievances".

This arrangement has been put in place in the past. Then-prime ministers Dame Jenny Shipley and Sir Jim Bolger addressed large crowds who were concerned over the then-issue of the fiscal envelope - the treaty settlement cap. The forums had run smoothly and the trustees believed they could ensure it ran smoothly again.

But Mr Key was unhappy with those arrangements and announced he would not be coming to Waitangi this year.

He is not the first prime minister to stay away from Waitangi. In 2008, Helen Clark also boycotted Waitangi and it was Mr Key as opposition leader who took the position that she should 'get over' her objections to going on to Te Tii Marae.

So what happens now?

A large contingent of TPP protesters are expected to be welcomed on to Te Tii Marae, and later this morning the opposition will also come on.

While Te Ururoa Flavell would usually go on to Te Tii Marae with other Crown ministers, the Minister of Maori Development and co-leader of the Maori Party no longer has a government to attend to.

Mr Flavell, with tribal links to the area, is likely to be sitting with tangata whenua on the marae today.

The annual Iwi Leaders Forum, whose members have arrived from around the country, won't have their meeting with the Prime Minister and there will be no annual breakfast.

Reaction varied at Waitangi to the prime minister's decision to stay away.

Some were disappointed but marae trustee Rihari Dargaville was not worried, saying "it's okay, he won't stay away for ever".

One thing's for sure, Te Tii Marae will continue to welcome people night and day - pohiritia te manuhiri i te ao, i te po.