Close to 300 people marched through the streets of Whangarei today to protest the signing of the Trans Pacific Partnership (TPP).

The marchers, waving banners and chanting, were led by the traditional hikoi which makes its way from Cape Reinga to Waitangi each February.

Lunchtime crowds in Whangarei watched as the marchers went past, and a number joined them for a rally in the mall.

Many said they supported the views of the protesters, saying the trade deal would favour global corporations and jeopardise New Zealanders right to determine their own destiny.

Watch John Campbell talk to Todd McClay on the TPP.

But one person asked why the marchers were not at work.

Another said if the TPP opened up new markets for New Zealand that had to be good for the country.

Whangarei man Chris Leitch hired a bus to take 20 people down to Auckland tomorrow to join the protest at the signing of the controversial trade deal.

He said it was important people got out and showed what they thought of the TPP if they did not want it.

"It's probably the only way people are going to have any say in the agreement, because there's no consultation; there's no select committee process; there's no debate in Parliament so the public won't get a say in any other way," he said. 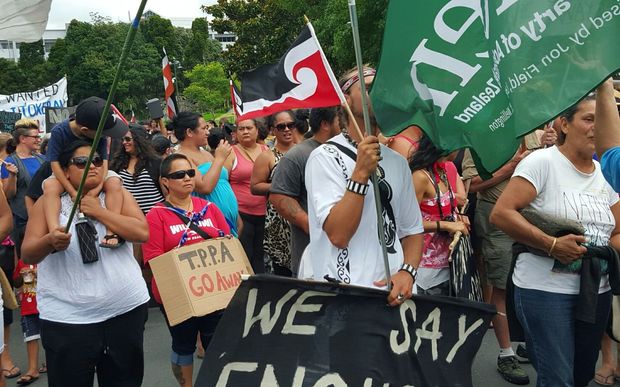 The hikoi is on its way to Auckland to protest at tomorrow's signing at SkyCity.

Well-known Northland kuia Lynette Stewart said she supported the right of the protesters to demonstrate strongly against the TPP but they should observe the good manners passed down by the old people.

She said Prime Minister John Key should go to Waitangi's Te Tii Marae, despite the risk of protest, and would be fine as long as the protesters observed the old ways.

But hikoi leader Heeni Hoterene said the time for being polite had passed.

"(Many of)... the elders don't even understand how these TPP issues are going to affect us," she said.

Ms Hoterene said if Mr Key went to Waitangi it would be for his own reasons and she could not say if he would be safe.

Speaking before the signing of the TPP in Auckland, Checkpoint's John Campbell asked Minister of Trade Todd McClay whether the protesters' concerns were legitimate.

"There is no loss of sovereignty. It is fair to say every time countries of the world agree something, make agreements with each other, they make commitments to each other.

"If in the end somebody is unhappy with what happens, a future government they have the ability to withdraw from this agreement, it's the same with every agreement New Zealand's ever signed," Mr McClay said.

Mr McClay said he asked only that protesters observed the law and were respectful to international visitors.