OPINION: I almost feel sorry for John Key - Waitangi Day can be a test of anyone's patience and willpower. One of the tougher assignments I was handed as a feature writer was after the 1995 Waitangi Day protests. 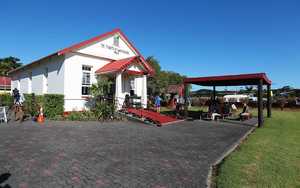 The then-editor of the Listener dispatched me northwards with a brief to explain what had gone so horribly wrong that the Prime Minister, Jim Bolger, had been moved to say, "…there can be no going back to commemorate and celebrate Waitangi as it was. That is over."

Dignitaries had been abused and spat at, protest flags had been run up the pole on the Treaty of Waitangi grounds, the New Zealand flag had been unceremoniously trampled underfoot on Te Tii Marae, and a general air of mayhem had, as the papers like to say, marred proceedings.

The general sense of celebration that had marked the 1990 sesquicentennial Waitangi Day, which balanced such outrages as a wet T-shirt being thrown at the Queen, was conspicuously absent. It was bitter.

The National government had been pushing its "fiscal envelope" policy, designed to put a billion-dollar cap on all treaty settlements, and resistance to this had reached a crescendo by Waitangi. But there was also a sense of grievance within Ngāpuhi about having been insulted as hosts by some of the protest actions, as well as complex divisions between conservative, moderate and radical Māori. 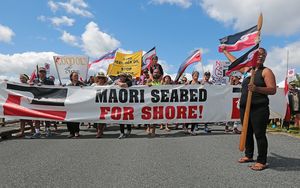 The focus of protests on Waitangi Day was once the Foreshore and Seabed Act. Photo: RNZ / Diego Opatowski

As a Pākehā journalist, I carried my own share of guilt and trepidation into the fray. One becomes acutely aware of one's ignorance of history, protocol and language on assignments like that. The need to explain leads deeper into the past, which is disputed territory too, until all hope of writing something definitive is abandoned. A deadline and a strict word limit do the rest. 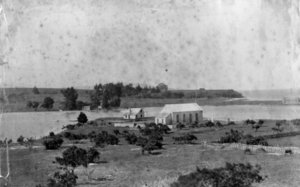 All that was quietly allowed to slide over the next few years, leaving Waitangi - the day and the place - as central as it always has been to our collective sense of self.

Since then we've seen Tame Iti fire a shotgun at the flag, Helen Clark reduced to tears, Don Brash spattered with mud and John Key manhandled by the mob.

The focus of the protests has moved from the Foreshore and Seabed Act to the Trans-Pacific Partnership, and this year has seen some confusion over whether the prime minister was even invited to attend, in order to be ritually abused. In the end he decided not to go. But the unique significance of the day persists.

Some New Zealanders roll their eyes at it all, some wring their hands, and a great many enjoy the day off work. If it can seem like the national Groundhog Day, or some perennial reminder of the unresolved and often acrimonious state of our post-colonial culture, I've come to see it as entirely fitting.

Better debate and engagement than patriotic conformity or strident nationalism. We are a work in progress, and on 6 February we can at least celebrate that.