It may be hard to believe - especially for the thousands who have had their homes and businesses flooded this year - but 2015 was actually drier than normal.

According to MetService, total rainfall at 1 December was only 80 percent of the annual norm, and yet some areas experienced intense rain and flooding. 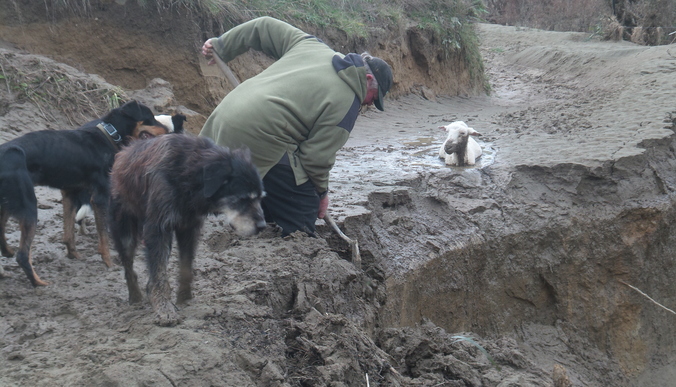 In Whanganui, Geoffrey Bunker reckons he could be dead, if he had not decided to sleep at his parents' house on 20 June.

The rain was still coming down in thick sheets and the Whanganui River was rising higher and higher when the glass artist made the call to abandon his studio on his family's property and take refuge in the main house.

The storm, which burst the banks of the river, cut a swathe of destruction from coastal Taranaki through Manawatu to the Kapiti Coast north of Wellington, triggered a state of emergency and caused $50 million worth of damage to insured property.

The total economic impact of the floods is hundreds of millions of dollars. 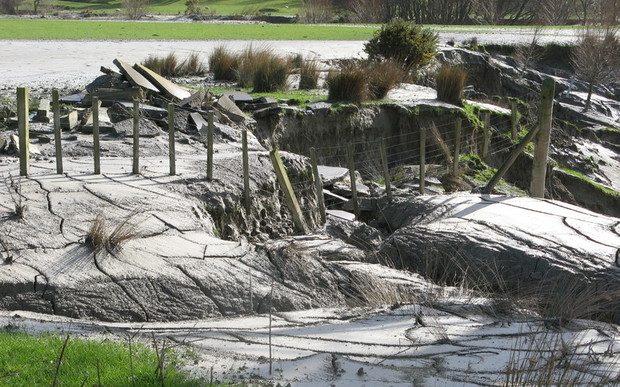 The Bunker family has lived on Whanganui's riverfront Anzac Parade for about 25 years, and they have weathered a few floods in that time.

Mr Bunker is annoyed they did not get the usual warning to evacuate before it was too late, despite ringing the council four times between 6pm and midnight to check whether they should leave.

"I had friends who could have evacuated my gear. They [Civil Defence] said: 'No, you should be fine'. We waited and waited until finally at midnight we self-evacuated."

He, his parents and brother packed into one car but almost immediately got stuck. 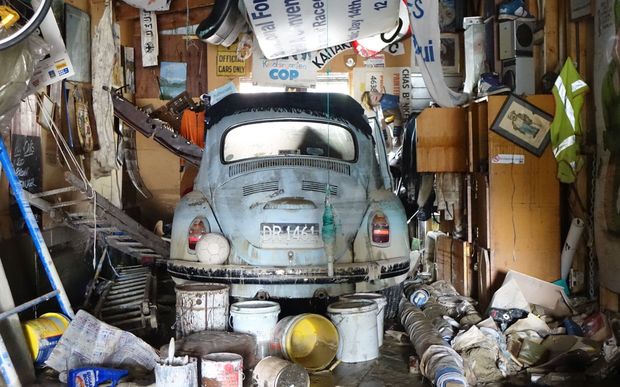 "The car started filling with water, and that's when we started to panic. Neighbours helped us push it while a Civil Defence guy stood on a bank and asked us what we were doing."

They were finally allowed in to see the house a month after the floods, but only moved back in properly about a month ago.

And it will be next year before Mr Bunker can afford to replace the $12,000 of uninsured glassblowing equipment that was ruined - but at least he is alive.

The high-water mark in the studio was higher than his head. "If I hadn't left when I did, I could have drowned."

Despite the threat from the river, Mr Bunker said he had no plans to move. "I love the river, I've grown up with it. 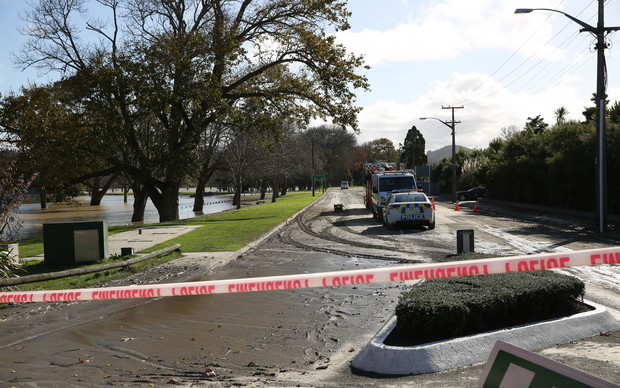 The threat from climate change was brought home to the people of Dunedin earlier that month, with a massive rain dump drowning the low-lying southern suburbs.

Dunedin City Council estimates 1250 properties were damaged in the flooding, which began on 2 June. Of those, 280 were "seriously damaged" including the home of Julie Myers and her husband Jim Baird.

The sunroom/ living space in their St Kilda home was inundated with contaminated water.

Once the waters had receded and builders had removed the sodden boards, they found a bedroom off the sunroom had actually separated from the house.

"We could see the outside through the crack," said Ms Myers.

Since then, their insurance company has sent a succession of builders, engineers and technicians to inspect the property.

Six months after the flood, the couple are still waiting for work to start and Ms Myers suspects they are "looking for a reason not to pay out".

"When it rains, we end up with a waterfall that comes down into the sunroom and then that dries and it gets hot. We've twice had the cleaners come at the insurance company's expense because there were jelly fungi growing on the walls."

MP for Dunedin South, Labour's Clare Curran, said other people were still not back in their homes and some were living in substandard conditions in flood damaged houses. 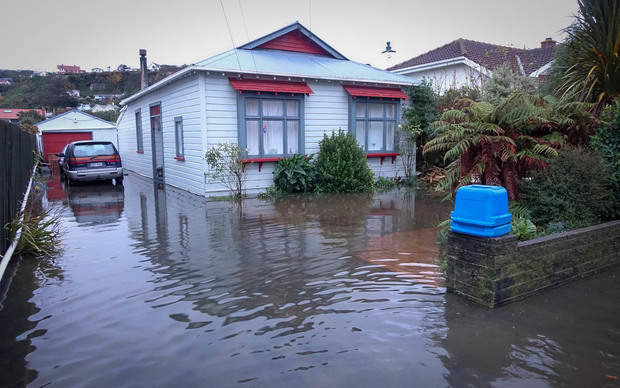 South Dunedin is built on swampland and its water table goes up and down with the tide.

The Commissioner for the Environment has identified nearly 3000 homes just 0-50cm above the spring high-tide line.

Ms Curran said Dunedin by itself could not deal with a "slow rolling disaster" of this magnitude. "Central government can't stick its fingers in its ears and look away."

Dunedin's mayor, David Cull said the council might need to go cap in hand to the government at some point, but it had a lot more work to do first.

He said until the council scoped that, it was not certain if Dunedin had the capacity to finance it.

In Wellington, heavy downpours on 7 March led to flash flooding, the eerie sight of cars floating down the street and drain covers shooting into the air on geysers of water.

It was the opening volley of two months of very wet weather.

The peak was to come in May when fierce localised downpours caused massive flood damage to homes and businesses and widespread transport chaos, with trains out of action and major roads blocked by slips and flooding.

Four classrooms at [http://www.radionz.co.nz/news/regional/276086/wellington-council-urged-to-tackle-flooding Tawa School were flooded, and some children had to be evacuated by kayak. 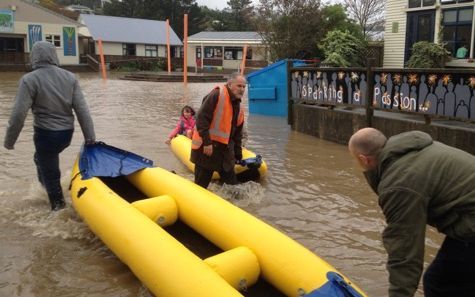 The children only got back into their refurbished classrooms a few weeks before the end of term.

One person drowned in Lower Hutt - police divers found the body of Dr Paul Hill, 80, a short distance from his submerged car in Sladden Park, Petone.

MetService meteorologist Georgina Griffiths said the deluge in Lower Hutt, which peaked at more than 40mm in one hour, was "very nasty".

"Yes, hard to believe, but it is true, helped along by the drier months of January, February and October.

"But for all that, we didn't lack extreme weather, especially during the particularly sodden months of April, May and June when we had several flooding events back-to-back."

Costas Kotsapas, who has lived in Wellington's Owhiro Bay for nearly 40 years, is not worried about rising sea levels.

While he has witnessed erosion gobble 2-3m from the waterfront over the years, he reckons that is "minimal".

The thundering 9m swells that blasted the South Coast at the end of May were not the worst he had weathered.

"I remember when my wife was expecting our daughter, we had to be evacuated because there were huge boulders littering the road.

"These days it's just shingle, sand and seaweed, but they [storms] do seem to have become more frequent in the last three or four years.

"Other houses have had roofs blown away, garage doors pushed in... at least it stabilises prices for first-home buyers." 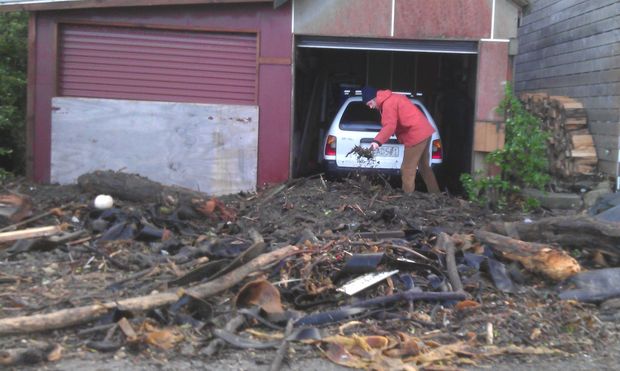 Debris washed up in front of Wellington's south coast houses in 2013. Photo: RNZ

The biggest chunk was the Whanganui floods in June, while the May floods in Wellington and the Kapiti Coast cost about $22 million.

Council chief executive Tim Grafton said it was hard to say whether individual insurance premiums would rise as a result.

"It comes down to frequency of risk and the extent of damage that occurs - and that takes time to unfold," he said.

In parts of Christchurch, land sank in the earthquakes - "a bit like climate change in fast motion" - and properties flooded several times over three years.

Insurance companies responded by increasing the excess from about $400 to up to $10,000.

With impending climate change and about $20bn worth of assets within 150cm of the mean high tide (as calculated by the Commissioner for the Environment), it was time for the country to get serious about mitigating risk, he said.

"Councils are the decision makers at local level, but do they have sufficient resources to do what's necessary?

"There are things that central government can be and is doing, such as making risk reduction a key focus for the Civil Defence Ministry and including natural hazards in draft Resource Management legislation."

Individual home-owners needed to face up to the risks they faced and people buying property must be fully informed, he said.

Flood protection systems for the Greater Wellington Waikanae and Hutt rivers were extensively upgraded recently and are now expected to stop everything below a 1-in-100 year flood.

No council-managed rivers or streams broke their stopbanks, despite Porirua Stream peaking at 66 cumecs, an amount not seen since 1980.

However, Mr Campbell said the council was predicting a couple of years of wild weather ahead.

On top of La Nino and El Nina weather patterns, which tend to switch the weather around year by year, there was also the inter-decadal Pacific Oscillation, which influences rainfall in 10-20 year cycles.

"The last time we saw frequent floods of that sort of order was the late 1990s and early 2000 ... we could get more of these events over the next couple of years."

Overlay that with the less predictable effects of climate change, and the likelihood was more intense rainfalls, bigger flows more frequently down rivers, and higher sea levels.

However, Mr Campbell said it was vital to ensure people understood the flood risks were, so when planning development could "avoid the need for the community to have to pick up the tab for more and more expensive flood repairs".