Entire communities may need to be uprooted due to rising sea levels and the Minister of Finance should start preparing for the financial impact now, says the Parliamentary Commissioner for the Environment Jan Wright.

Scroll down to view an interactive map showing areas identified as low-lying.

There was no doubt sea levels were rising and it was certain the frequency of coastal flooding would increase as the sea level rises, Dr Wright said.

Areas of low-lying coastal land that at present flood during storms or king tides will experience more frequent and severe flooding.

In some cases, the rising sea will increase the duration and extent of river floods, such as the flooding that occurred in Whanganui earlier this year.

The graph below shows projections of the increased frequency of extreme water levels put together by NIWA. 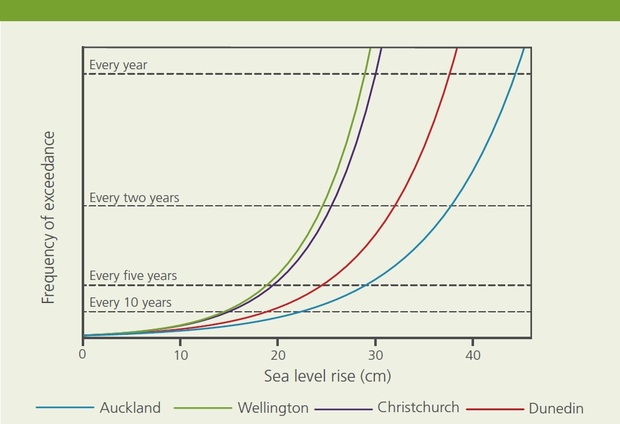 These projections are based on the longest historic records of sea levels in New Zealand, measured on tide gauges at the ports of Auckland, Wellington, Christchurch (Lyttelton), and Dunedin.

The report focused on the impact on New Zealanders and their communities from sea level rise and made eight recommendations to Minister for the Environment Nick Smith, Minister of Conservation Maggie Barry and Finance Minister Bill English.

As part of those recommendations, it looked at the role local and central government played in the planning processes for settlements and what needed to be considered in the future.

While the world needed to act urgently on reducing greenhouse gas emissions - through which the Earth warms and contributes to rising sea levels - Dr Wright did not believe the same urgency applied to the planning needed to prepare for the rise.

"Haste can be counter-productive," she said.

However, there were aspects that needed to be considered immediately, including the granting of consents for greenfields development.

"We now see building new suburbs on land prone to liquefaction in much of the country as foolish. We should see allowing new subdivisions on vulnerable coastal land as equally foolish."

How New Zealand's major cities will be affected

The report produced a series of maps to show the different elevation bands of the country's largest coastal cities.

The areas on the map showed low-lying coastal areas that had an elevation of less than 150 centimetres, which made them vulnerable to rising sea levels.

However, they were not hazard zones, and should not be interpreted as such, Dr Wright said.

Only a small proportion of Auckland was relatively low-lying compared with other towns and cities.

The major low-lying areas shown in the map below have not been densely built on.

There are pockets of low-lying land in the city, including parts of the central business district, Mission Bay, Kohimarama, St Heliers, Onehunga, Mangere Bridge and Devonport. 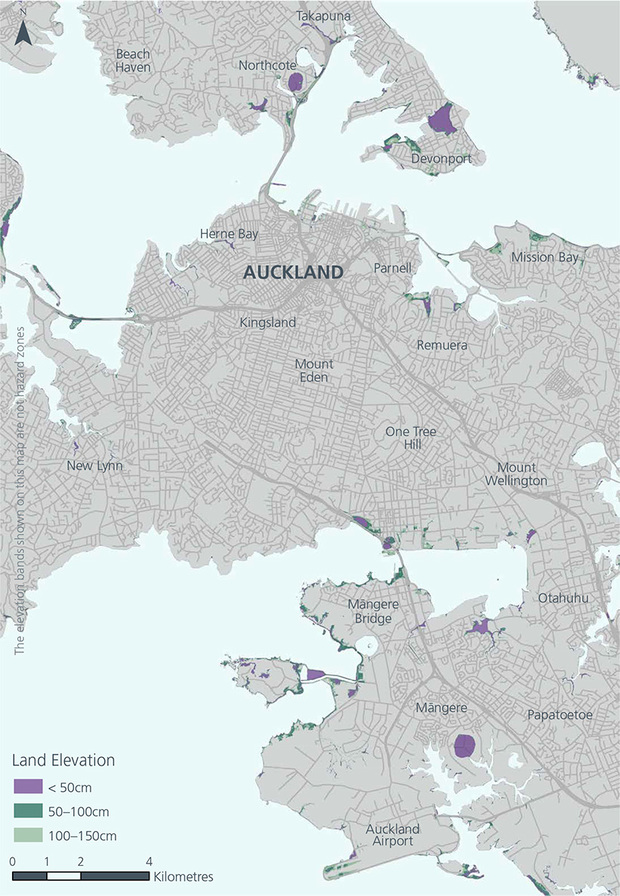 About half of the low-lying homes in Auckland are situated along the coast in the north of the city.

There are vulnerable transport links, which included the Northern Motorway just north of the Harbour Bridge and the causeway on the Northwestern Motorway where it crosses the mud flats at Waterview.

Tamaki Drive is also subject to flooding, most frequently where it crosses Hobson Bay.

Wellington has about 100 houses that are lower than 50 centimetres above the spring high tide mark, but significantly more at slightly higher elevations.

Most of the low-lying areas in Wellington are on the floodplain of the Hutt River - in Petone, Seaview and Waiwhetū. 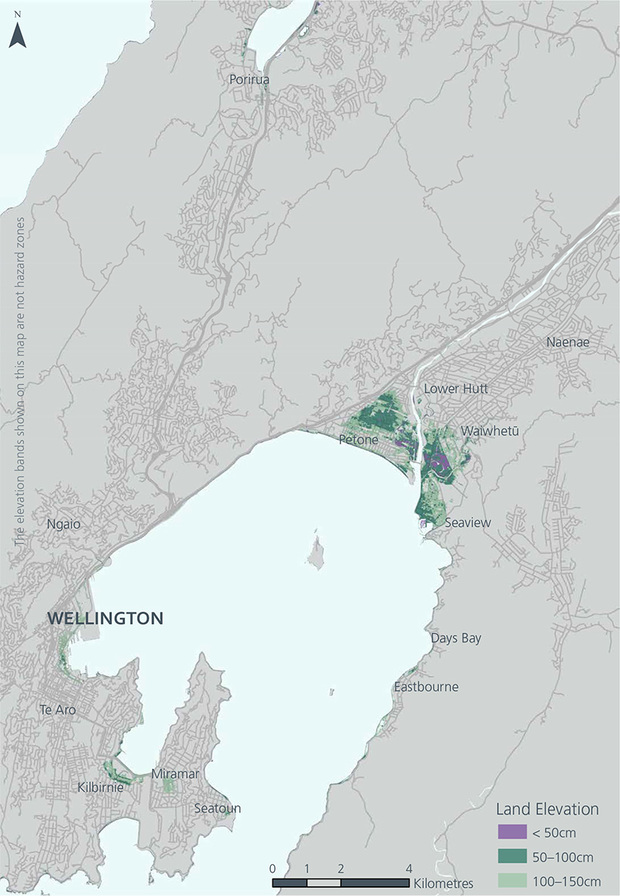 While river and stream flooding is the more pressing issue for this area, rising sea levels are expected to exacerbate such river floods.

There are also small pockets of low-lying land in the Wellington central business district, Kilbirnie, Eastbourne, and around Porirua Harbour.

A large proportion of land in Christchurch is low-lying.

The numbers of homes and businesses listed in the table below did not include any in the residential red zone. 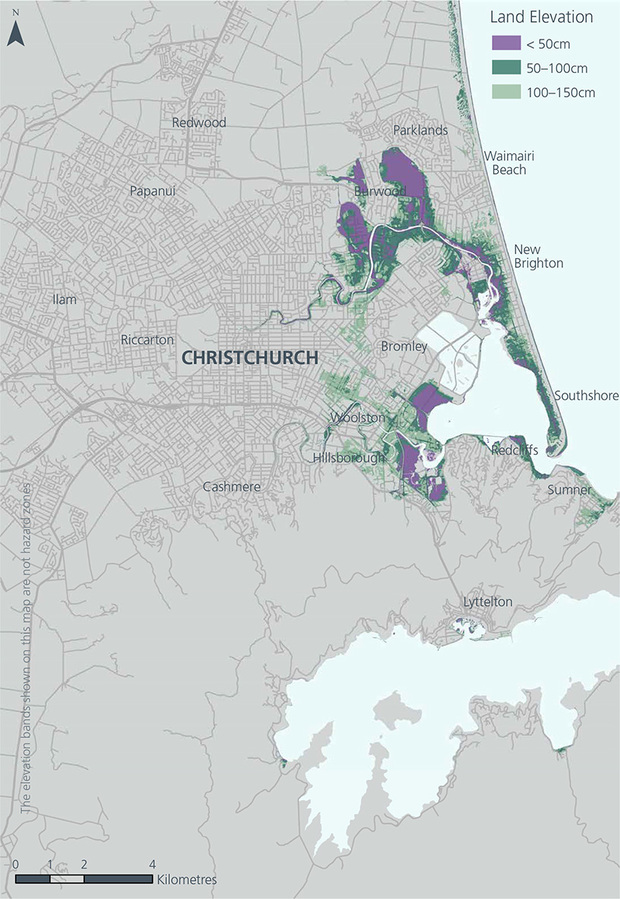 A considerable amount of the low-lying land shown on the map below is in the residential red zone and had been largely cleared of buildings.

Despite this, there are many more low-lying homes in Christchurch than in Auckland or Wellington - around the rivers and in the coastal suburbs.

A large built-up part in the south of Dunedin City is very low-lying.

South Dunedin is built on land reclaimed from a coastal wetland, and of the nearly 2700 homes that lie less than 50 centimetres above the spring high tide mark, over 70 percent are lower than half that elevation.

The low elevation of South Dunedin along with its high water table makes it prone to flooding after heavy rain. The water table also rises and falls with the tides, so these problems are expected to increase as high tides become higher. 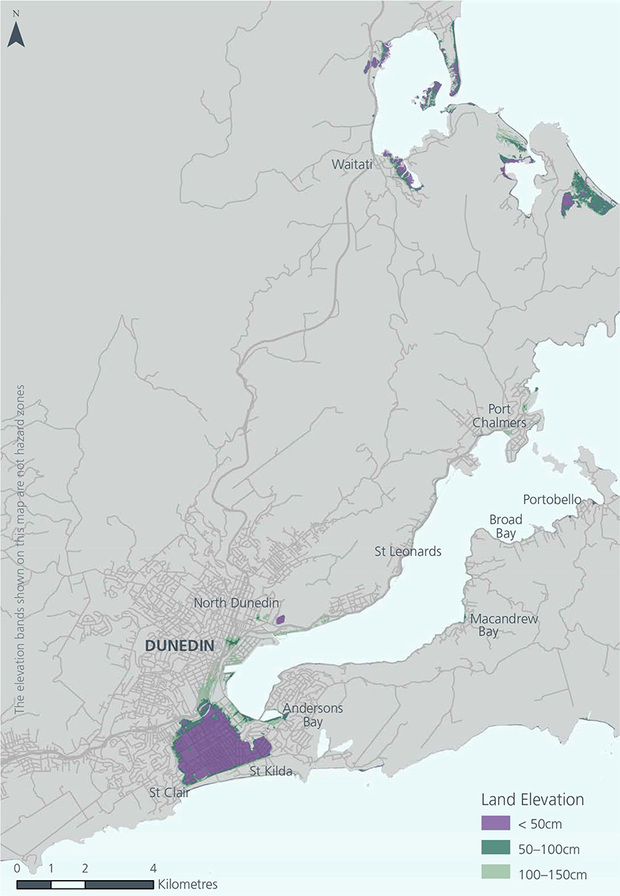 Beyond South Dunedin, some areas of the waterfront and central business district are low-lying including sections of State Highway 1 and Portsmouth Drive.

Portobello Road and Aramoana Road, which run along either side of the harbour, also have low-lying sections, with some places less than 100 centimetres above the spring high tide mark.

Much of the rail line to Port Chalmers - an important link in the region's transport infrastructure - lies less than 150 centimetres above the spring high tide mark.

Many smaller towns and coastal settlements will also be affected by rising sea levels.

The report found five more cities and towns with more than 1000 homes lying less than 150 centimetres above the spring high tide mark - Napier, Whakatāne, Tauranga, Motueka, and Nelson. Maps of these and other areas can be viewed [www.pce.parliament.nz here].

Some of the recommendations:

The report emphasised that sea level rise was not something that might happen, but was happening, and that adapting to it would be costly. It was inevitable that both central and local government would come under pressure for financial assistance from the impact of rising sea and moving settlements, Dr Wright said.

"Homes, businesses, and infrastructure worth billions of dollars have been built on low-lying land close to the coast."

While individuals may be able to make their own choices about building and living on low-lying land in some cases, it should not cost the public anything, she said.

Little thinking had been done on how to actually manage moving settlements, and in some cases entire communities will need to be uprooted, which will have a financial burden.

"But the alternative to managing an inevitable retreat will be leaving people living in homes that become uninsurable and then uninhabitable."

It was never too soon to consider the economic and fiscal risks of sea level rise, she said.

The report noted the shock that people experienced when they received a letter advising their property was susceptible to flooding or erosion, and the council processes around that was unclear.

Difficult decisions would need to be made which would disadvantage people, "but they must be made carefully and with empathy."

A standard process for council engagement with coastal communities should be included in central government direction and guidance on sea level rise, Dr Wright said.

Councils' planning for sea level rise was problematic, including issues with science assessments, community engagement, and with the planning and management decisions that followed.

The government was recommended to put direction on planning for sea level rise into a National Policy Statement, such as one envisaged for dealing with natural hazards.

Officials were urged to address the issues the report raised in the upcoming revision of the 2008 MfE Guidance Manual - which provided direction and guidance to councils on how they should deal with sea level rise.