Workers at AFFCO's Rangiuru and Horotiu plants have been told they are not allowed to wear union t-shirts to work, the Meat Workers Union says. 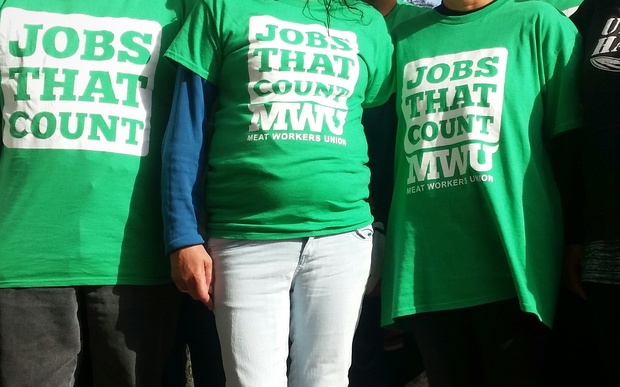 The t-shirt that has been described as inciting intimidation. Photo: RNZ / Kim Baker Wilson

Last month, the Employment Court ruled the company had acted in bad faith and undermined the union during contract talks.

The union said, since then, workers on contracts had been bullied by supervisors.

Union organising director Darien Fenton said, in the latest incident, the employer at the Rangiuru plant near Te Puke told workers they were not allowed to wear their t-shirts to work and likened them to gang insignia.

She said that comment was offensive to union members and prompted a spontaneous response from workers to wear their union t-shirts to work today.

"Around the various plants, they're all going to be wearing their t-shirts to work. I mean let's be clear, they don't wear their t-shirts while they're working, they have special equipment, special clothing that they wear. It's actually a matter of them trying to stop them actually wearing them to work."

AFFCO said it did not have a company-wide ban on workers wearing union t-shirts.

But the company said when clothing such as gang insignia was used to incite intimidation and divisiveness, it was up to individual plants whether to ban it from the workplace.