The breeding season is off to a good start for the fairy tern, raising hopes that this year's fledglings will boost the numbers of New Zealand's rarest seabird. 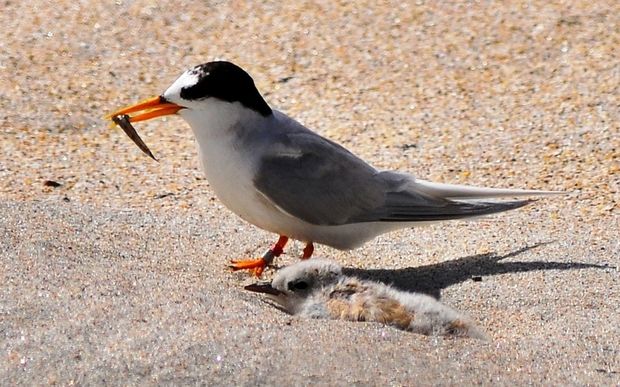 A fairy tern and its chick. Photo: SUPPLIED

Only about 40 of the tiny birds are left, and the Department of Conservation has stationed five wardens to protect their few remaining nesting sites on Northland beaches.

Fairy Tern Trust convenor Heather Rogan said the season was looking promising, with three nests already found at Mangawhai and one at Waipu.

She said if the parent birds got their chicks fledged before the summer holiday season they were more likely to survive.

"It's relatively early. If the birds get their nests away late October, early November and they hatch successfully it means that they can be flying before the great influx of holiday makers.

"The weather has been relatively kind - a bit windy, but we haven't had any major storms, so so far so good."

Five of the six chicks raised last summer were females, she said, which was another good omen for the future of the species.