The Conservation Department is making a plea for New Zealand's most endangered bird, the fairy tern, as visitors pour into Northland for Labour Weekend.

The tiny birds make their nests in the sand in wildlife refuges on four Northland beaches: Waipu, Mangawhai and Pakiri and in Kaipara on Papakanui Spit. 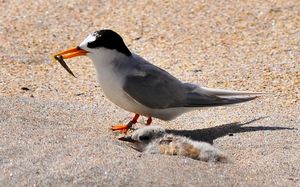 A fairy tern and its chick. Photo: SUPPLIED

DoC says there are only 39 fairy terns left - but last year they managed to fledge 10 chicks - thanks to the constant efforts of volunteers who protect the nests, which are little more than scrapes in the sand or shellbank.

"This is a particularly vulnerable time for the birds. And with the summer influx of visitors to the area, we're asking locals to remind their visitors of the laws ... no dogs, cats or vehicles on the wildlife refuge, and for people to keep their distance from the birds, their nests and the eggs."

Two dedicated DoC fairy tern wardens have been fencing nesting sites and preparing them by laying down shell.

Volunteers also play a big part in monitoring, trapping and surveillance of the Northland nesting sites.