Thousands of Aucklanders crammed into Victoria Park today for the official celebration of the All Blacks' victory at the Rugby World Cup.

The team arrived back in New Zealand this morning, where about 4000 people greeted them at Auckland Airport.

Their arrival was followed by a noon ceremony in the central city that attracted thousands more.

Review RNZ's live coverage of the event in Auckland

After a short parade from their hotel to Victoria Park, the team and management spent most of their time at the ceremony greeting fans, signing autographs and posing for selfies for almost an hour.

The triumphant team then gathered on stage for a brief ceremony which kicked off with a welcoming haka and a performance by Sol3 Mio. 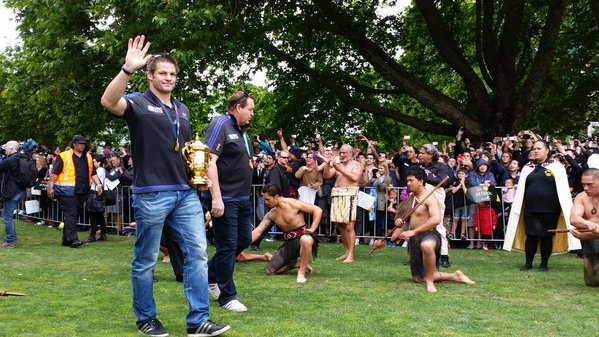 Speaking first to the crowd, All Blacks captain Richie McCaw thanked the supporters who had come to the park and the airport to congratulate the team.

"Seeing you here has made it all worthwhile," he said.

McCaw, who was given the symbolic "freedom of the city" honour by Auckland mayor Len Brown, also said it had been a huge effort, but the result made life a little bit easier.

"We can smile for the next four years and say we're world champions and that's pretty cool."

Coach Steve Hansen paid tribute to the All Blacks who were retiring from New Zealand rugby after their Rugby World Cup success.

"There are about nine or 10 of the guys going, and each and every one of them has done the job." 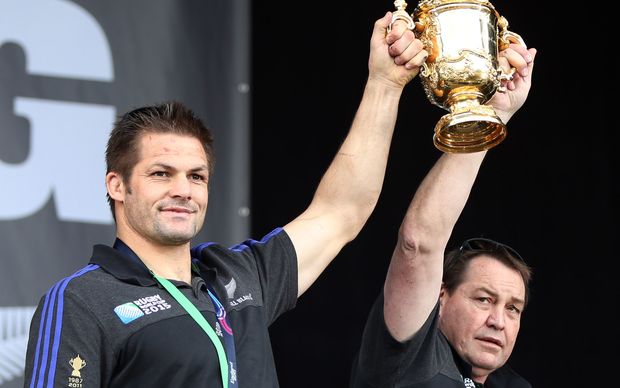 "It's an honour and a privilege just to be part of the All Blacks, but to put a smile on so many people's faces in this country is an even greater honour and privilege, so from all of us we'd like to thank you for the support you've given us and hopefully we've made you proud." 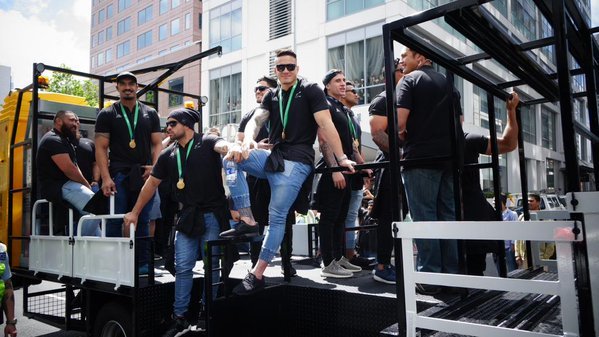 Other team members, including Dan Carter, Ma'a Nonu and Keven Mealamu, also spoke briefly, before Nehe Milner-Skudder accepted a cake from a young fan on stage, wrapping up the official celebration.

The All Blacks will now travel to Christchurch for a parade, before moving on to celebrations in Wellington on Friday.

Wellington mayor Celia Wade-Brown is encouraging people to line the streets at lunchtime to celebrate the Rugby World Cup win.

She said fans from all around the region, the lower North Island and top of the South Island were welcome, too.

There will be a brief welcome at Parliament grounds at 11.30am. The All Blacks will leave Parliament at noon into Lambton Quay, then along Willis Street into Mercer Street before arriving in Civic Square between 1 and 1.30pm.