OPINION: Where is Luke Skywalker? This is perhaps the biggest debate to emerge to date over the promotional material recently released for Star Wars: The Force Awakens, to be released in New Zealand on December 17.

But I think there is a bigger question to consider: has Luke turned to the Dark Side?

His face is nowhere to be seen in the trailers or marketing material. And in the new Force Awakens poster the Jedi Knight is absent.

The Official Trailer #2 briefly features the voice of Skywalker.

"The Force is strong in my family," he says as the image of the melted and disfigured helmet of Darth Vader appears. "My father has it," he continues.

Then it cuts to what appears to be Skywalker in the scene at the end of Revenge of the Jedi on Endor, where he is cremating his father's body.

"I have it," his voice continues as he puts his robot hand on R2-D2 in a narration reminiscent of Return of The Jedi. "My sister has it," and then, as the screen goes black, he says, "You have that power too."

Who has that power too? A Jedi's abilities are passed on through bloodlines, so one can surmise that Skywalker is in the process of telling a blood relative that he or she has Jedi abilities.

"Only a blood relative could he be sure", as Yoda would say. With Luke getting old, what could be better than introducing a new young Skywalker into the storyline?

In the final official trailer for the film, a new masked evil character is introduced about 49 seconds in.

"Nothing will stand in our way. I will finish what you started," the mysterious and evil looking character says with the melted helmet of Darth Vader beside him on what looks like the deck of an Imperial Star Destroyer.

The same melted helmet featured when Luke Skywalker is explaining his family history to a relative in Trailer #2.

How could the remains of Darth Vader's helmet go from the funeral pyre on Endor to the deck of an Imperial Star Destroyer? The most plausible explanation is Luke Skywalker took it there.

And sure enough, for a brief moment at 1'02" in the final trailer, there is Skywalker. The mysterious and evil looking character appears to be using the force on him - turning him to the dark side, I would surmise. Certainly, it looks like something very stressful is going on.

And to those wondering why Skywalker isn't in the Force Awakens theatrical poster - well, I believe he is. 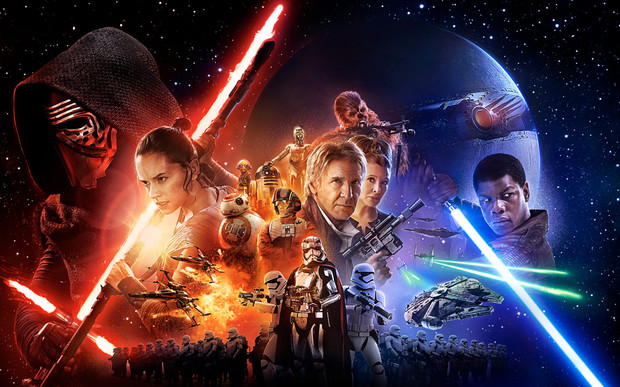 Look to the top left of the poster above, and the largest person featured is another mysterious masked character wearing a cloaked robe similar to what a Jedi would wear.

That, I believe, is Skywalker after he has been turned to the dark side in the scene mentioned earlier.

He is one of the main characters to appear in all the Star Wars movies, so it seems fitting he gets top billing on the Force Awakens poster, albeit in an evil mask.

Remember, Star Wars is essentially the story of the Skywalker family and so it stands to reason that The Force Awakens continues to chronicle the family saga.

What better twist than for Luke, who so resisted the Dark Side to redeem his father, to succumb as he grows older. Epic.