In what might be the greatest troll of all time, Disney has debuted the third trailer for the new Star Wars movie at halftime in an American Football game. 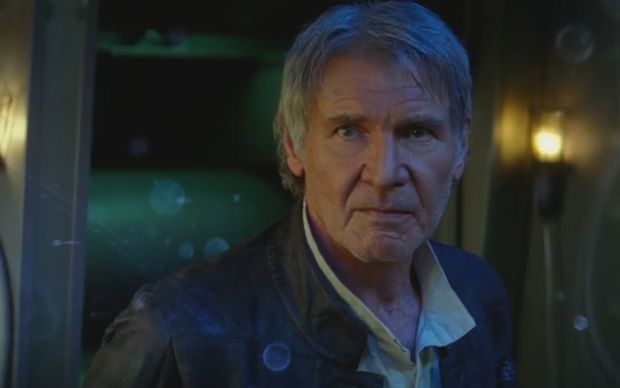 The trailer for The Force Awakens had three teaser trailers of its own. It featured new footage from the film, and characters who have not been seen before.

Harrison Ford's Han Solo gets a line: "It's true. All of it. The Dark Side. The Jedi. They're real." Carrie Fisher's Princess Leia and Mark Hamill's Luke Skywalker also briefly appear.

The movie isn't actually being released until December, but advanced sales have already crashed websites, as fans flock to get the best seats on opening night.

Predictably, social media quickly filled up with fans' reactions - both positive and negative.

Well I am seriously geeking out about that Star Wars trailer. That looks incredible.

Pretty let down with the new @starwars trailer.... waited all day for it :(

Everyone typing their blog reaction to the Star Wars trailer right now. pic.twitter.com/vpMUhZlSo5

Where was Spock in that Star Wars trailer? Did they kill him off?

We're in this bar and they turned the volume way up on the tvs for the star wars trailer, the bar went silent, it was a magical moment