New Zealand Media and Entertainment, known as NZME, is merging its various news divisions and says about 15 journalists will be made redundant.

The company said the Herald, Herald on Sunday, NZME News agency, Newstalk ZB, and Radio Sport will relocate to a purpose built media hub in central Auckland by December.

The new newsroom will have more than 280 people, over a mix of platforms. 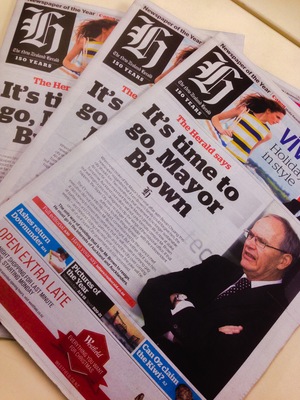 NZME staff were told of the final plan at a meeting this morning, but neither NZME chief executive Jane Hastings nor managing director Shayne Currie were present.

In a statement announcing the news, Mr Currie said submissions received from journalists during the feedback phase of the proposed newsroom restructuring did impact on the final plan.

"We received excellent feedback -considered, constructive and detailed responses and this positively influenced the final plan," he said.

Herald columnists John Drinnan and Brian Rudman told RNZ they were no longer on staff, but would continue writing weekly columns on a freelance basis.

The news come shortly after the Herald cut loose several columnists, including Paul Casserly, James Griffin, Dita De Boni, Jock Anderson and Peter Calder. Many columnists the paper has retained are personalities from TV and radio, most of whom appear on other NZME networks, such as Newstalk ZB's Mike Hosking and Rachel Smalley and Radio Hauraki's Matt Heath.

While some jobs were to go, Mr Currie said several new digital roles were being created as the company moved to what he called a mobile first media business.

"Data journalism, using statistics and data as a source for interactive and indepth storytelling, is playing a critical role as we extend our quality journalism offering," he said.

NZME first announced in September that its print, digital and radio news would come together in Auckland - "one integrated, multi-platform, 24/7 operation", it said in a statement.

In a statement, Jane Hastings said NZME's rejig would "not impact on individual brands" which would "retain their unique perspective and tone".

Dita De Boni told Radio New Zealand marketing and management executives at NZME had too much influence on what happened in the newsrooms.

While NZME would not comment on the integration plan in September, chief executive Jane Hastings did reveal details at a media conference, Future Forum, in Sydney.

At the Future Forum she said: "It's all about content. Our content hubs are news, sport, entertainment, business and lifestyle, and we've got new leaders for those areas".

For each breaking story, newsroom teams will be encouraged to consider all opportunities within each medium, she said.

"Is that a story that needs to be expressed in print? How is it going to be amplified online? Actually, is there an event idea around here? What's our social strategy? Is there a native [advertising] opportunity across this?"

In addition to editorial leaders for each content hub, Jane Hastings told the Future Forum there would be channel editors for mobile, video, digital, radio and publishing. The integrated newsroom would also have a new daily routine centred around the rhythms of each media channel.

"The heartbeat of the newsroom that we're moving to is 7 minutes, 30 minutes, 24 hours: 7 minutes for digital, 30 minutes for radio and 24 hours for the paper the next day," said Ms Hastings. 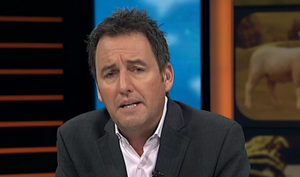 NZME's not the first media company to mash together all its different media as part of a digital transition.

The Herald's announcement follows a restructure at publisher Fairfax New Zealand, which led to 159 jobs being disestablished but 174 created; staff said many of the new jobs were at lower pay rates and offered poorer conditions than their previous contracts.

Fairfax's restructure resulted in the creation of new jobs focused on the production of online news. The editors of local daily newspapers were replaced with regional editors tasked with supplying online news and video as well as producing the company's newspapers.

Australia's first fully-integrated multi-media newsroom was also discussed at Future Forum - the merger of the television newsroom of Perth's Seven News and the newsroom of The West Australian newspaper.

The chief executive of the merged Seven West Media company Chris Wharton said it was working well, but the Future Forum also heard there was resistance.

"Not everybody on our floor is a massive enthusiast about it. Lots of people are, but there are pockets of resistance if I'm to be honest. But we just can't let that bog us down. We're on a conveyor belt heading somewhere. We've just got to keep reinventing ourselves every day," said Howard Gretton, the editor of Seven News in Perth.

"We will eventually end up hiring young people into our newsroom who have the ability to do every bit of the work across any platform. That's the long-term reality of it," said the editor of The West Australian, Brett McCarthy.